In this dystopian novel, the world as we know it has been replaced by the Republic of Gilead. The caste system of Gilead has broken women into legitimate and illegitimate groups. The legitimate women are further broken down into categories known as Aunts, Marthas, Econowives, Wives, Daughters, and Handmaids. If a woman does not meet the criteria for this system, she joins the illegitimate group as either an Unwoman or Jezebel, or ends up dead. Each household in the Gilead is run by a Commander of the Faithful. If they are wealthy, the family will be a mix of Wives, Marthas, and a Handmaid, but if they are not, the Econowife is responsible for all roles. Each person living in the Gilead is assigned a specific color to correspond with their role.

“There is more than one kind of freedom,” said Aunt Lydia. “Freedom to and freedom from. In the days of anarchy, it was freedom to. Now you are being given freedom from. Don’t underrate it.”

The Handmaid’s Tale centers around Offred, literally meaning “Of Fred”, who is a Handmaid living with her Commander and his Wife, Serena Joy. As a Handmaid, Offred is expected to bear children for the Wife. She lives each day dressed in red from head to toe, completely concealing her body, and white wings around her head to prevent her from seeing or being seen. Each day she allowed to go for a walk with another Handmaid to the market and purchase the goods she has been tasked to acquire. Women are no longer allowed to read, so here we find that all signs have been converted to pictures. There no longer are the frivolous items of the past, instead on these walks we receive a glimpse into a grim future run by extremists, who hang those who have disobeyed from The Wall.

This tale takes place at the beginning of the Gilead rule, which allows Offred to provide the reader a look back at what her life was once like and the sequence of events that lead to present day. The reader gets the chance to hear about her husband, Luke, and how they met; what life was like when women still had freedoms; her daughter; and her time spent at the Red Center, preparing her for life as a Handmaid. Offred lives a life where she is always being watched by “the Eyes” and has no freedoms. Her only purpose is to produce a child for her Commander and his Wife. 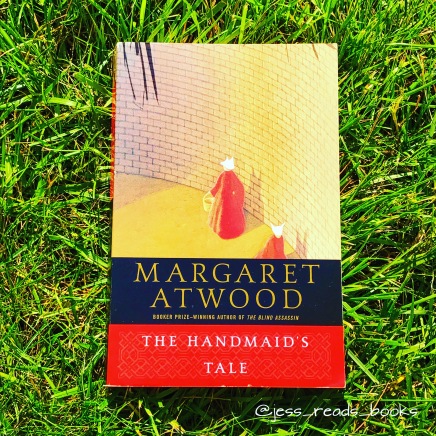 Margaret Atwood’s novel portrays a foreboding future with extensive supervision and limited rights to those who are not a part of the elite. A world where a fertile woman’s only place is to produce offspring to populate a place where the birth rate has dipped too low. A fascinating tale of a scary possibility, which causes the reader to take a look around present life and contemplate the direction our world is headed. The Handmaid’s Tale has solidified Atwood as a must-read author for me.