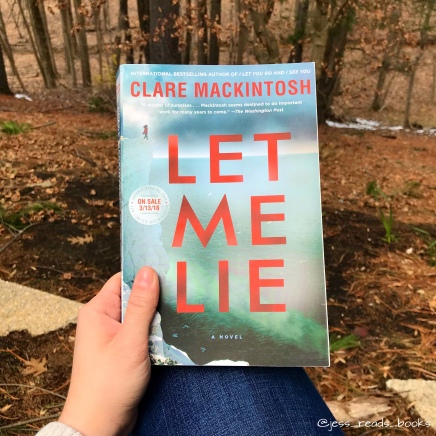 Anna Johnson lost both of her parents. Her father, Tom, was the first to commit suicide by jumping from a local cliff. He texted his wife, Caroline, to tell her that he couldn’t continue living the way he was and that he was sorry. A few months later Caroline decided to follow suit and also committed suicide by jumping from the same cliff. Anna was unable to console herself, confused why her mother would choose this path, knowing how abandoned her father’s suicide had made them both feel.

We used to joke about dying – when we were young enough, still vital enough, for death to be something that happened to other people.

Since the deaths of her parents Anna has tried to console herself. She’s now in a relationship and has young baby. Anna is slowly trying to rebuild her life, but lately she can’t help feeling her mother’s presence. When an anonymous note shows up on the anniversary of her mother’s death Anna quickly begins questioning if her parents were murdered. Were Tom and Caroline’s suicides staged? What really happened to Anna’s parents?

Our relationship was young; a spark that could be snuffed out as easily as coaxed into flames. I couldn’t have known you’d stop loving me; that I’d stop loving you. I couldn’t help but be flattered by the depth of your feeling, the intensity of your eyes.
You would die for me, and in that moment, I thought I might die for you, too.
I just never thought either of us would have to.

LET ME LIE is a slow burning thriller crafted in a methodical and deliberate manner. Every line Clare Mackintosh writes serves a purpose and draws the reader closer to the truth. This is not an intense, quick read, but a sharply crafted story of family secrets with unveilings about several characters that create a mood of unease and tension making the reader anxious to get to the end of the book. The use of alternating narrators constantly keeps the reader guessing what will happen next. This writing style also allows for multiple aspects of the story to be observed and the reader to form their own guesses for what the truth is. While some parts could be considered a bit predictable to an avid crime fiction/suspense/mystery reader, I don’t believe that stops LET ME LIE from being a truly entertaining read. This was the first time I have read a Clare Mackintosh novel and I can assure you, it won’t be the last!

Thank you so much to Goodreads, Berkley, and Clare Mackintosh for hosting a fantastic giveaway where I won this copy!

One thought on “Book Review: Let Me Lie”