Evelyn Hugo is one of the most famous actresses of our generation. She has lived a life of glamour and scandal that has been highlighted in tabloids throughout the years, most notably including her seven marriages. Evelyn recently graced the cover of these new outlets again with the declaration that she would be auctioning off several of her famous dresses and donating all proceeds to breast cancer research. This sudden charitable venture has peaked the interest of many journalists, but it is Monique Grant who Evelyn chooses to reach out to. 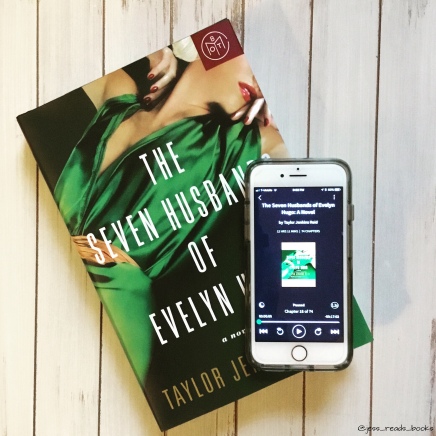 Monique Grant is not a well-known journalist or author. She works as a regular writer for a magazine called Vivant, but has no true claim to fame. Having recently hit a rough patch in her personal life with her husband leaving her and a lack of stimulating work, Evelyn’s request to meet could not have come at a better time. Monique quickly discovers that Evelyn wants to tell much more than a story about the dresses she has chosen to auction off. She wants Monique to author her biography and she wants to tell her every last detail that has made up her life. Why did Evelyn choose Monique? What will the secrets of her life reveal?

Some marriages aren’t really that great. Some loves aren’t all-encompassing. Sometimes you separate because you weren’t that good together to begin with.
Sometimes divorce isn’t an earth-shattering loss. Sometimes it’s just two people waking up out of a fog.

THE SEVEN HUSBANDS OF EVELYN HUGO transports the reader straight to Evelyn’s couch with Monique as we all listen to Evelyn tell the tale of her life, her fame, and her greatest love. I chose to split my time with this novel between the audiobook and the physical book. I could not be happier that I this was my first audiobook. I was swept away to another world filled with glitz, glamour, and heartbreak. Taylor Jenkins Reid created a masterpiece with this book! I was hanging on every word of Evelyn’s story and sitting in my car dreading going in to work because I needed to listen to just one more chapter. Reading Reid’s writing was no different and I flew through the ending. And boy that ending…what a book hangover I was left with! THE SEVEN HUSBANDS OF EVELYN HUGO is a stunning book of historical fiction, genuine love, and the raw emotions of life.

6 thoughts on “Book Review: The Seven Husbands of Evelyn Hugo”