Carl Louis Feldman is an elderly man suffering from dementia and a life resigned to a halfway house. He used to be a widely regarded photographer until he was tried for murder. Carl was accused of taking the life of a young woman and evidence, while miniscule, linked him to the death. The jury didn’t believe there was a strong enough connection and he was eventually acquitted. Over the years there were other cases that had strange links to Carl, but he was never convicted of being a killer. That hasn’t stopped the woman who is now showing up at the halfway house claiming to be Carl’s daughter from wanting Carl to pay for his sins.

“I’m talking about photographs,” Carl says. “They are both mirrors and windows. The story the photographer tells and the infinite interpretations of strangers. The perfect shot lives. Breathes. Expands. People think music is the universal language. It’s photography.”

The young woman posing as Carl’s offspring is actually the sister of a missing girl. Her sister, Rachel, left home one day and never came back. She’s convinced that Carl must have killed her sister because one of his photographs was found in their childhood house. After years of pouring over Carl’s life and his actions, she has a plan to find out the truth about not only what happened to Rachel, but also the other women tied to Carl. The two embark on a road trip straight down memory lane with various stops planned out to test Carl’s suspicious dementia claims. Will Carl tell her the truth? Did he kill her sister? 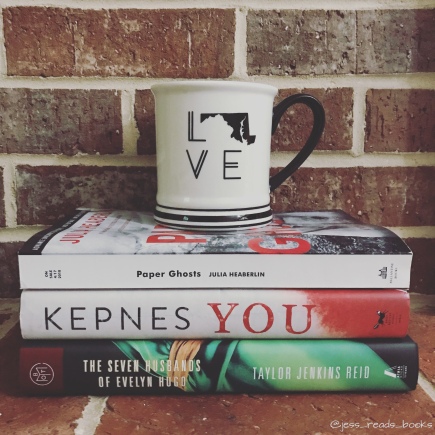 If people are not in their right minds, you gotta know better than to push, right?

PAPER GHOSTS is a work of crime fiction and suspense that takes the reader along on the road trip with Carl and his fake daughter. There are moments of true suspense and Carl gives the reader and this young woman a glimpse into what he’s capable of doing. He might look frail and appear that he can’t remember his past, but Carl harbors a secret strength both mentally and physically. As each day passes in the road trip the lines between Carl as a criminal and Carl as an elderly man with severe mental impairment blur together and make it hard to distinguish who the real Carl is. Are the ghosts in the back seat as real as the ghosts of his past? The constant battle of wanting to trust Carl or see the good in Carl is always there up until the very last page.

While Carl is the center of the story, the mystery woman who is posing as his daughter is just as important. She shows the raw emotions a person is left to deal with after losing a loved one, the passion and determination in wanting to know the truth, and the unyielding desire to stop at nothing and sacrifice everything in the name of justice. I think one of my favorite moments was when her name was finally revealed. It was almost as if all of the things that had weighed on her over the years and truly owned her as a person were stripped back and she could finally be herself. Heaberlin has written a compelling piece of literature in PAPER GHOSTS that left me at the edge of my seat, flying through the pages, and thinking about how many more minutes were left until I could pick the book back up.

A special thank you to Goodreads and Ballantine Books for hosting a giveaway of which I was a winner of a free copy of PAPER GHOSTS. This in no way influences my review.