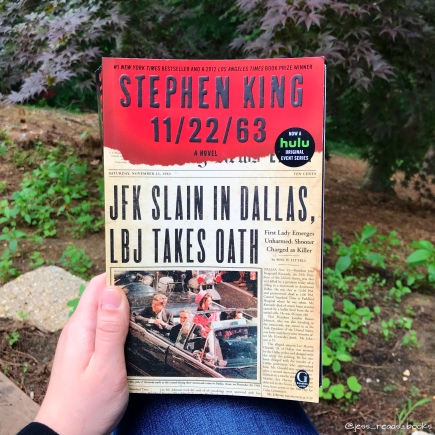 The United States remembers November 22, 1963 as the day President John F. Kennedy was assassinated. The country was rocked to the core. In present day 2011, diner owner Al Templeton has built an obsession around the Kennedy assassination and what would have happened if Lee Harvey Oswald never got to take that fateful shot. At the same time, Jake Epping, a high school English teacher in the same area of Maine is wondering about a different time in history he would like to change. While grading essays for a GED course he teaches, one in particular written by the school’s janitor touches his heart. The janitor’s father went crazy one Halloween night and murdered his family, leaving just him as the sole survivor equipped with a limp to remind him of the horrors every day. Jake can’t stop himself from wanting to know how the janitor’s life would have ended up if this had never happened.

As luck would have it, Jake is Al’s best customer and this evening he’s taking his sadness over the janitor’s life to Al’s diner to be cheered up by some good conversation and a burger. What Jake receives from Al is much more than he could ever imagine. It seems Al has changed practically overnight and is dying of cancer, despite seeming fine the last time Jake saw him. Al shares with him that located in the very back of his storeroom is a rabbit hole that can transport Jake to September 1958. This story seems insane and impossible to believe until Al takes him to the spot and Jake himself walks straight into the afternoon sunshine of 1958. When Jake comes back to 2011 only two minutes have gone by and Jake is eager to hear of Al’s adventures through the rabbit hole. 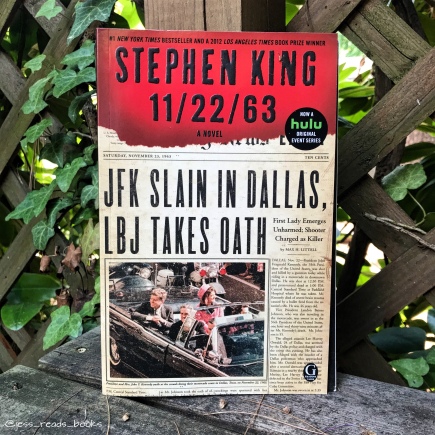 You know how, on a bright day, you can close your eyes and see an afterimage of whatever you were just looking at? It was like that. When I looked at my door, I saw it on the floor. But when I blinked – either a millisecond before or a millisecond after my eyes closed, I couldn’t tell which – I caught a glimpse of my foot on a step. And it wasn’t in the dim light of a sixty-watt bulb either. It was in bright sunshine.

Al has gone to 1958 more times than he can count. Most of those times his quest was nothing more than innocent, but the more times Al went back, the more he began to wonder about changing the events of the past. He has built up an obsession with stopping the Kennedy assassination and after spending several years in the past he came desperately close to achieving his goal, only to be struck down by lung cancer. Al has convinced Jake to head back to the past and stop Lee Harvey Oswald. As Jake travels back in time he assumes the life of George Amberson. He learns many hard lessons during his journey, with the most valuable being that the past is obdurate. The past is determined to stop Jake from making changes. Will he be able to stop Oswald in time to save Kennedy? How will Jake’s presence in the past alter the present?

He hadn’t done that before, and I thought with some unease about the so-called butterfly effect. I thought I was watching that butterfly unfurl its wings right before my eyes. We were changing the world. Only in small ways – infinitesimal ways – but yes, we were changing it.

11/22/63 is unlike the recent works of Stephen King I have been reading, in that it is not focused on a town or a group of individuals and how the events of the world around them are affecting them. This novel instead focuses on one man, Jake Epping, and how he is changing and altering the world around him. This shift in focus certainly has the potential to slow down a reader not used to this style of writing from King. The chapters are filled with detailed descriptions of the five years Jake lives in the past as he makes his way closer to the day of Kennedy’s assassination. These chapters tell the story not just of Jake’s mission, but the life he is building, the friends he is making, and the love he has found. These aren’t pages of intensity, but an honest reflection on how a man has come to live in a different time period.

Life turns on a dime. Sometimes toward us, but more often it spins away, flirting and flashing as it goes: so long, honey, it was good while it lasted, wasn’t it?

For me the strongest part of this book was not the thrill ride of arriving to the main event, that I have found myself loving over several recent King reads, but the relationships I built with characters. I love Jake Epping. Did he drive me a little crazy while living his life as George Amberson? Of course! His actions were natural and human and most of the time meant to be in the best interest of others and the future, but that didn’t stop me from wanting to shake him and asking what he thought he was doing. Sadie Dunhill, George’s great love of the past, was a star all her own in the novel. Sadie is first introduced as this klutzy, damaged girl who over the years transforms in to a strong-willed, no nonsense woman. My favorite character doesn’t come in the form of a human, but is the past itself. Throughout 11/22/63 the past rears it’s ugly head and thinks of clever, malicious, and sometimes downright horrific ways to stop Jake from achieving his goal.

The past is obdurate for the same reason a turtle’s shell is obdurate: because the living flesh is tender and defenseless.

I have to say I had my doubts at points throughout reading 11/22/63 where I felt the story wasn’t going in the right direction or was building too slowly to the main event. I thought at times that Jake was losing sight of what he was meant to do and focusing too much on the new life he was building. I was wrong. A man can’t travel back in time and stay there for five years without those things happening. I also wouldn’t have sat on my couch with tears in my eyes as I read the final pages if King hadn’t written all of what he did about Jake’s life. 11/22/63 is a story not just of time travel and the effects it has on the world, but the effects it can have on the person doing the traveling. A reminder that every little action we take in the world influences something else somewhere.