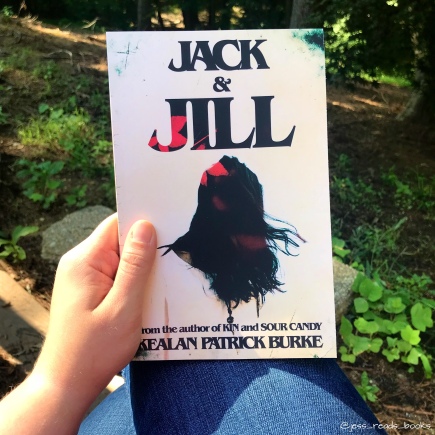 In order to escape the brutal reality of their childhood, Gillian and John would visit the local cemetery by their church every Sunday. Perhaps an odd place to frequent, but they had their reasons. Here they would pretend to be Jack and Jill. They would roll down the large hill that separated the cemetery and the elementary school. Pretending to be Jack and Jill was an escape from the abuse they were facing in their father’s hands. This fantasy world brought them comfort until the day that John tragically died.

I am twelve, John is nine, and we have not yet learned of death. Pain and horror, however, are kindred. They visit us nightly, and take away little pieces of our soul. We live in nightmare and escape in daylight.

Gillian is all grown up now with a husband and two children. She is trying to make a normal life for herself, but recently the nightmares about her childhood and her father have gotten worse. The overwhelming fear from these nightmares, the feeling that someone is stalking her. A shadowy figure with their head wrapped in a plastic bag haunts her every move. The terror has become so real that these dreams have transitioned into hallucinations. Can Gillian gather the strength to fight back or will she ultimately succumb to the monster of her nightmares?

Alone, the events we’ve been forced to endure would have destroyed us. Together, we find solace in a world that seems to shun it.

Coming in at under 100 pages, JACK & JILL packs a literary punch! This novella is dark and focuses on the sensitive subject of child sexual abuse. Despite this cringeworthy topic, this story is very readable. The pages reveal a look into Gillian’s adult world and the nightmares that haunt her, as well as the hallucinations that these nightmares have transformed into. She is consumed by her past to the point of being unable to sleep at night, hold a job, and know what is happening in her family. I’m not usually a fan of ambiguous, did that or didn’t that happen endings, but I was surprisingly happy with this one. There were definitely a lot of questions for me when I finished reading, but I think that’s ultimately what made me love the story. JACK & JILL is a read that is impactful no matter what the truth to the story ultimately is. Kealan Patrick Burke is an absolute mastermind novella writer and I can’t wait to pick up another!