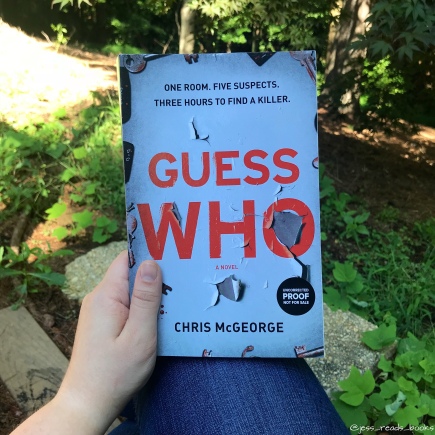 Morgan Sheppard became a star at the age of eleven when he solved a murder of his teacher that everyone believed was a suicide. Sheppard was instantly hailed as a young detective, which brought him to a life as a television star. He now hosts Resident Detective, which is a crime show focused on Sheppard solving cases in a daytime talk show format. Discovering who the father of a child is or if someone in a relationship is cheating have become his specialty. Or so it appears to the general public.

Today, we are going to be playing a little game of Murder. You’ve already found that one of your fellow guests is no longer with us. In fact, he has been brutally murdered by one of my associates. And here’s the snap: that associate – the murderer – is in the room with you right now. One of these people is the murderer. The others are not – red herrings, macguffins, whatever you want to call them.

One day Sheppard awakens to a nightmare. He is handcuffed to a bed in a hotel. But he is not alone. There are five strangers there with him, who are slowly waking up to the same reality. They soon discover they are locked in this room and there is a dead man in the bathtub. The television flickers on to a man wearing a horse mask who instructs Sheppard that he has three hours to determine who killed the man in the tub or he, his fellow captives, and everyone inside the hotel will perish in an explosion. Can Sheppard prove he has what it takes and solve the crime or will it be revealed that he is not the great detective people believe him to be?

If Morgan Sheppard doesn’t correctly identify the murderer in three hours, then you all die. And not just everyone in the room. Everyone in the hotel. My people have placed explosives around the structure of the building. I press a button and the Great Hotel becomes a Great Mess.

Chris McGeorge has a cleaver debut in GUESS WHO, which is a modern take on the classic locked room mystery. The narrative is told with a focus on Sheppard and the current drama unfolding in the hotel room, along with random sprinklings from Sheppard’s past. The reader must pay close attention to these stories from the past in order to gather clues about the present. What lies on the surface of this mystery is only the beginning. McGeorge cleverly disguises many truths while at the same time throwing the reader into a panicky state as the timer counts down on Sheppard and his group of strangers. Nothing will make a reader devour pages faster than a ticking clock. The locked room mystery is just the beginning of this tale and in order to avoid spoiling the fun, I’ll leave it at that! GUESS WHO is filled with clever revelations that will have the reader solving the mystery of the hotel room, the killer, and the man behind the mask alongside the main character. There’s a bit of implausibility in the later half of the novel, so reader beware you may need to suspend your belief at times, but for me that made it all the more of an entertaining read!

A special thank you to Hanover Square Press for sending me a free copy of this book!

3 thoughts on “Book Review: Guess Who”