Jack Torrence has recently been let go from his job. He and his family are struggling to make ends meet. It seems that things are on the upward swing when a close friend of Jack’s offers him the opportunity to be the winter caretaker of The Overlook Hotel. This charming hotel is located in the remote Colorado wilderness and because of the intensity of the winter snowstorms, the whole building closes for the off-season. The position will give the Torrence family a place to live, plenty of food to fill their bellies with, and a chance to start over.

As Jack, Wendy, and their son Danny begin their adventure of creating a new life, there is an overwhelming sense of dread. Danny is the first to feel it. He has premonitions that there is something wrong with The Overlook. Wendy is concerned that months of isolation will put more of a strain on their fragile family than already exists. Jack is there to ease their concerns as he actively works to change their minds. Once the family finally settles in they realize that the their new home has a past, which is haunting the present. There is something lurking in the shadows that will change their lives forever. Can the Torrence family survive the winter at The Overlook Hotel?

Stephen King has sent another homerun read into the books for me with THE SHINING. I went into this one remembering bits from a long ago viewing of the movie only to find that the book is completely different. For starters, the Torrence family may just be one of my favorite dysfunctional families I’ve ever read about. I loved the staggeringly different personalities that make up this trio. Jack is battling an internal struggle with alcoholism, childhood family trauma, and the effect these two are having on his son and wife. Wendy has family issues of her own and thought that running away to marry Jack would save her from them, but she has now come to realize maybe that wasn’t the best plan. Together they are trying to make things work for their son, Danny, who is quite gifted. He has the shining. He can sense and see things before they happen. He can see that their family is going to suffer greatly by moving to The Overlook Hotel. All of this would be too much for an adult to handle, but King brilliantly writes about how a child harnesses and copes with this ability. I love the way King creates child characters who are wise beyond their years.

Unlike many of King’s other novels I have read throughout the year, this one doesn’t have a laundry list of characters to memorize, as he chooses to focus on a select few outside of the Torrence family. It was nice to learn about people like Al Shockley, Stuart Ullmann, former guests of The Overlook, the hotel itself, and my personal favorite, Dick Hallorann. There also was less continual killing off of characters, which can sometimes drive me a bit batty when reading other King books. In THE SHINING I was able to see most characters, main and secondary, build up through the entirety of the novel. 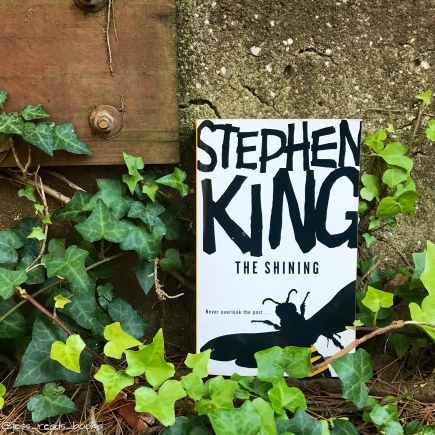 Monsters are real. Ghosts are too. They live inside of us, and sometimes, they win.

The Overlook Hotel plays its own role as a character in this novel along with the many inhabitants of the hotel. King truly plays up the creep factor with some of the instances that happen within the walls of the The Overlook. I can’t imagine staying in a place like this for more than a few seconds and then immediately running away! Unfortunately for the Torrence family that isn’t an easy option as they’re now stuck in the remote, snowed in area of Colorado where no vehicles can get in or out. The fear of isolation and being trapped is overwhelming and creates this overarching sense of dread for the book. Are there over-the-top scenarios? Of course, but without them, where would be the fun of this novel?

Living by your wits is always knowing where the wasps are.

At the end of the day THE SHINING was a wonderful trip into the world of classic horror with Stephen King. I’ve had another fantastic stop along my King journey with Janel and can’t wait to see where DOCTOR SLEEP picks up the story next month!

7 thoughts on “Book Review: The Shining”