Detective Inspector Hulda Hermannsdottir has reached the age of retirement at sixty-four. Despite her fears of what this will mean for her future and desire to keep working the Reykjavik Police Department wants her out. They are ready for a man, several years Hulda’s junior, to take over her spot and are pushing her to leave immediately. Hulda has managed to negotiate at few more days on the force and turns her attention to a case she believes was wrongly classified as a suicide. 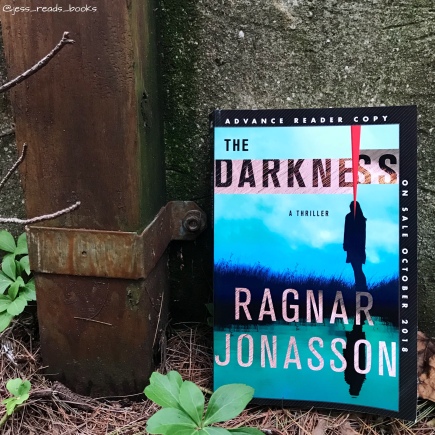 She didn’t deserve to die, but in the circumstances, his reaction had been the only one possible.

A young, Russian asylum seeker, Elena, was found dead in an isolated part of the country. The investigator working the case put little effort into finding out more details, as he believed it to be an open and shut suicide case. At the time the body was found, Hulda was convinced he was incorrect, but no one would listen to her. Now is Hulda’s chance to dig deeper into the life and fate of Elena. What she finds ends up bringing more questions to the surface and soon Hulda doesn’t know who to trust. Can Hulda put Elena’s case to rest forever or will she be forced to retire before she has the opportunity?

The isolation was thrilling, yet at the same time it frightened her. The landscape felt somehow cruel and unforgiving, especially now, in winter; nature didn’t care if you lived or died. It would be terrifying to get lost here.

Ragnar Jonasson has been on my radar for several years now, so when I saw he was starting the Hidden Island series I was determined to finally pick up his work. What a shame I waited so long. Jonasson’s writing is absolutely brilliant! Within the first few pages of THE DARKNESS I was transported to Iceland and entranced by the character of Hulda. It’s not often a crime fiction writers finds themselves following a DI so far into their careers, yet alone one facing the prospects of retirement. Hulda’s situation brings to light many issues of gender and age discrimination, that as someone who works in HR, I always find intriguing. What I think resonated with me most about Hulda was that despite the many uphill battles she has faced, she genuinely doesn’t want to leave her career behind. Hulda is passionate about bringing justice to those who deserve it.

The advantage of darkness is that there are no shadows.

Jonasson builds the main story around Hulda in THE DARKNESS, but also incorporates two additional narratives that work to create an air of mystery for the reader. One of the narratives focuses on a woman who has conceived a bastard child. She has had to give up her daughter, but works hard as a single mother to get her back from the orphanage. The other narrative is about a woman embarking on a journey into the Icelandic wilderness with a man she barely knows. Jonasson successfully kept me guessing at who was the voice behind these narratives until he was ready for his reveal. I will say I did guess the face behind one, but the other I was a bit slower to connect the dots on because of how the story was laid out. These narratives, along with Hulda’s story combine to create an all-around dynamic piece of crime fiction. THE DARKNESS is atmospheric, captivating, and absolutely brilliant!

Disclosure: Thank you to Minotaur Books for sending me my free review copy!

One thought on “Book Review: The Darkness”