The Gardiner’s seem to have hit a rough patch in their marriage. Jack and Ali want to find a way to make it work, so they decide to move to a self-sufficient commune located in the English Fens. The commune is housed on the grounds of a former asylum known as Rosalind House. Prior to being the location for a psychiatric facility, a family lived on the grounds. This family was accused of being witches and eventually met their untimely deaths because of these accusations. Despite the history of this property, the commune has embraced the past and is building a future. 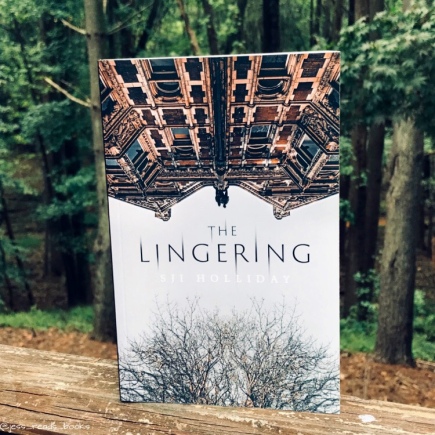 There is no one there.
Was there ever anyone there? Or was this just another of these trick that her mind has been playing on her?

Jack and Ali’s arrival is met with apprehension as new members are uncommon. These two seem to have bought their way in, a fact that does not sit well with many members. As the Gardiner’s try to find their place in the commune it becomes clear that they are hiding some dark secrets from their past. The residents start to become suspicious, with Angela being the most vocal about her concerns. As Angela digs deeper into Jack and Ali, concerns grow for what will come to the surface. Is there more to this couple than meets the eye? Just what brought them to this commune?

It’s the house they need to worry about. What it was built on. The memories that lie here, hidden deep in the foundations…

When I first saw the synopsis for THE LINGERING, I knew I wanted to read it. When I saw the cover for THE LINGERING, I knew I had to have it. S.J.I. Holliday has created a masterpiece within the pages of this book. The story is told through alternating narratives from Ali, Angela, and Smeaton, with journal entries from a former doctor who was around during the period the building was the Rosalind House thrown in intermittently. Each narrative added to the tension and overall plot of the book, as Ali worked to cover up her and Jack’s past, while Angela dug deeper. The snippets from the journal also helped to add a backstory to the paranormal aspect of this book. You see, aside from just being a former asylum and the home of witches, it’s also haunted. There is so much backstory and depth to the commune that you can truly imagine what it must look like and how being there feels. Holliday does a brilliant job of making the setting a standalone character of this book. The writing is richly atmospheric and the haunting is downright chilling.

There is an unfamiliar smell in the air today. Something like wet pine cones and mulched earth. A hint of old sweat, something sweet, like a lily, and the sticky ripeness that comes with unwashed bodies.

My favorite part of THE LINGERING has to be the psychological aspect. Every character in this book has something going on behind the scenes, something they are keeping hidden from others. There is goodness at the core of several characters, but there are also those that embody pure evil. There is evil in the history of the land and town, as well as within certain characters. The examination of the psyche and the depths of how far some people are willing to go to push others is absolutely fascinating. Every single page of THE LINGERING is intriguing and the finale to this story will leave you both cringing and in awe.

4 thoughts on “Book Review: The Lingering”