Sonja has taken her son Tomas and escaped to sunny Florida where she hopes to build a new life for them. She has finally been able to escape the trappings of the cocaine trade in Iceland. One day Tomas goes missing and soon a series of events are put into motion that will take Sonja straight back into the world she was desperately trying to escape. Along with her son, Sonja is whisked away back to Iceland where she will need to pay the consequences of her failed escape. 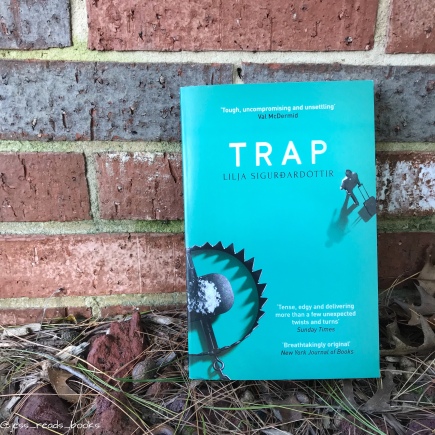 By the time she had hauled herself up, out of the water, and had filled her lungs again, she had a new plan; a new strategy to escape from the trap.

Back in Iceland we find that Sonja’s lover, Agla, is battling her own drama. She is awaiting her sentencing for an ongoing financial misconduct case against her and some of her former coworkers. It appears Agla also owes money to a powerful entity and looming jail time won’t get her out of paying her debts. Sonja is trying to distance herself from Agla as she sorts out her own troubles. Coming to Sonja’s aide is Bragi, a customs officer on the cusp of retirement and desperate to make quick money to take care of his dying wife. How will Sonja sort out the latest drama that has landed in her lap? Will she ever be free of the cocaine drug lords?

It was never going to end. There was no way out and she would have to accept that. It made no difference how hard she fought, she would never be free.

Lilja Sigurdardottir delivered an electrifying story about Sonja’s life in Iceland’s underground cocaine trade within the pages of SNARE. The clever and intense follow-up, TRAP, picks up right where SNARE left off. Instantly the reader is hooked once more on Sonja’s seemingly never ending drama. Despite thinking that she has officially escaped her troubles in the sunshine of Florida, life has another thing coming for Sonja. TRAP is a high energy story that will keep readers fully invested in the characters and on the edge of their seat waiting to see what conclusion Sigurdardottir has created this time!

Achieving her own freedom was down to her, and her alone. That was a terrifying idea.

The alternating POVs take a step up with the second installment in this trilogy, as the reader is treated with hearing from Tomas, Sonja’s young son, and Maria, an employee in the special investigators office who just happens to be looking into Agla. Old favorites, Sonja, Agla, and Bragi, are also back again, picking up their stories where we left off in the previous book. Each narrative has its own plotline and an interconnectedness with the others that really works to keep the pages turning. Short, snappy, and intense chapters further fuel this need to keep reading as it feels as though Sigurdardottir has mastered the art of a cliffhanger seemingly with each chapter. TRAP is a fantastic thrill ride of crime fiction that has solidified Lilja Sigurdardottir has a must read author for me!

Please be sure to check out all of the amazing bloggers heading up this exciting tour!