Alain Delambre lost his job four years ago. He is a fifty-seven-year-old former HR Executive, who now finds himself stuck in the world of unemployment. These days the only job offers he is receiving are for low-level, manual labor positions, which are far outside of his comfort zone. Alain finds himself at the end of his rope of mental sanity. He hates having to rely on his wife to be the breadwinner and not being able to help his adult children with their financial concerns.

On the edge of losing his mind at his current dead end position in a factory, Alain receives an offer from a major consulting company. They are looking to hire an HR assistant for a big-time client. Alain immediately jumps at the opportunity. Despite his immense doubt that he will ultimately be selected, Alain vows to do anything to get the job. Anything. So, when the company declares part of the recruiting strategy is that Alain and the other applicants must compete in a role-playing game that involves taking hostages from the company’s top executives, he doesn’t bat a lash. In over his head, but unable to see a way out Alain starts to unravel in the days leading up to the game. Can Alain take out the competition and just what will he sacrifice for his ultimate goal? 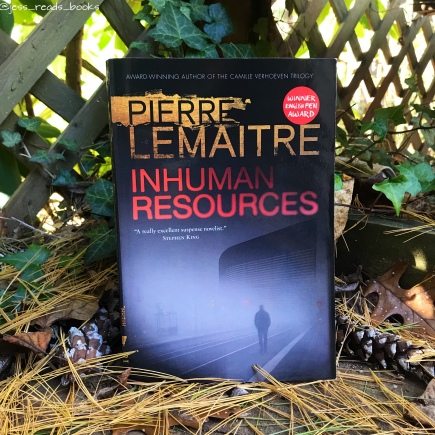 Violence is like drinking or sex – it’s a process, not an isolated phenomenon. We barely notice it set in, quite simply because we are ready for it, because it arrives at precisely the right moment. I was perfectly aware that I was angry, but I never expected it to turn to cold fury. That’s what scares me.

Earlier this year I read and fell in love with BLOOD WEDDING by Pierre Lemaitre, so when I saw he had a new novel coming out, I instantly knew I wanted to read it. Bonus: this book centers around someone who used to work in HR, which is my real-world gig, so I thought the connection was intriguing!

When I first started INHUMAN RESOURCES I was completely drawn into Alain’s life and his plight of going from a big-time executive to someone barely scraping by. The differences between the two lifestyles are distinct and the reader can truly sympathize with Alain’s inner turmoil. I was fully invested in this story, up to and through the hostage taking scenario. Things ended up falling off for me in the “after” section of the book, which encompasses what happens in Alain’s life post-hostage event. Without getting into too many specifics, I will say that I felt like this section dragged on and it became hard to stay focused while reading parts. In my mind it’s a case of the book could have been shorter, but that’s a personal preference.

I have lied so much and so often that I’m walled in.

Issues with length of the book aside, I really loved the premise of this story. I think Lemaitre has a gift for making the characters of his stories truly come alive on the pages. Alain is a relatable man, with a not-so-uncommon unemployment situation, which makes it easy to connect with him. The predicament which Alain ends up in is one of the more unique stories I have read in the crime fiction genre lately, which really makes the book standout. I loved how suspenseful sections of this book were and they greatly added to the overall mood of the story. I would recommend this book to anyone who is an avid reader of the crime fiction genre and is looking for something outside of the normal storylines we see.

If you want to kill a man start by giving him what he seeks the most. More often than not that’s enough.

Thank you to Quercus USA for sending me a free copy of this book in exchange for my honest review!