Ellie Mack was fifteen-years-old when she disappeared. She was her mother’s golden child. She had an endless future of possibilities ahead of her. Ellie simply vanished without a trace. Ten years have passed since that fateful day, but her mother, Laurel, will never be able to forget what happened. She has lived with this immense loss over the years; losing herself and her family in the process.

One day Laurel meets a charismatic man named Floyd at a local cafe. Their connection is instant and before she can stop herself, Laurel is being swept off of her feet. She soon comes to find that Floyd has a nine-year-old daughter named Poppy. Her resemblance to Ellie in both looks and mannerism is unbelievable and Laurel can feel her heart starting to fill after being empty for so many years. New evidence has also come to light about Ellie’s fate during this time, which is bringing Laurel a sense of closure and peace. With so many things going right, why does Laurel feel this overwhelming sense of unease?

If she could rewind the timeline, untwist it and roll it back the other way like a ball of wool, she’d see the knots in the yarn, the warning signs. Looking at it backward it was obvious all along. But back then,. When she knew nothing about anything, she had not seen it coming. She had walked straight into it with her eyes open.

THEN SHE WAS GONE is my first experience reading a book by Lisa Jewell. After seeing a few early reviews swirling about this book I knew I wanted to add it to my Book of the Month box. Unable to make room for this one on my physical book lineup, I was pleased to see that the audiobook was available from my library.

The story of Laurel’s life and what happened to her daughter, Ellie, is dark and edgy with plenty of twisty revelations to keep a reader on their toes. Right from the start the reader is dropped into Ellie’s disappearance and her life leading up to that fateful day. I really thought hearing things from Ellie’s point of view, as well as sections from other characters at points throughout the book made this story flow fantastically. This is not the typical alternating POV book, but instead Jewell chooses to let the reader hear mostly from Laurel, with interruptions from other characters to tell their side of the story. I absolutely thrive off of books with alternating POVs, but this style really worked with the story and made the reading experience more engaging, tense, and delightful. 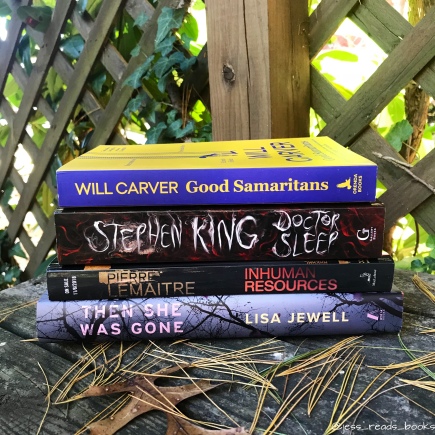 Despite being able to figure out who was involved in Ellie’s disappearance, I was still surprised by various aspects of the actual incident. Jewell gave much more depth to the situation than I would have initially guessed I would receive. I don’t want to give too much away, so I’ll stay sparse on the details. What I will say is…wow! What a cast of characters and the things they are willing to do! THEN SHE WAS GONE is truly a fantastic thriller and I highly recommend checking it out as an audiobook. The narration is absolutely divine!

One thought on “Book Review: Then She Was Gone”