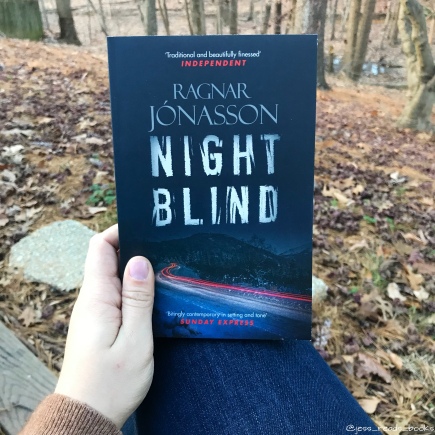 NIGHTBLIND launches 5 years since the events of SNOWBLIND. Ari Thor Arason is continuing to serve as a policeman in the peaceful town of Siglufjordur. The calm that normally graces this fishing village and close-knit community has come to a screeching halt after the murder of another policeman occurs. This man was shot a point-blank range in the dead of night while inspecting an abandoned house. Ari Thor is left with a difficult mystery on his hands as there are few clues and no known motives to help him solve the case.

As the winter closes in around him, Ari Thor must put together a complicated timeline of events that involves local politics, the new mayor, and a psychiatric ward in Reykjavik. When a new young woman moves into town the connection between her past and her mysterious appearance brings another layer of danger to the small village. In order to protect those of Siglufjordur, Ari Thor must race against a rapidly ticking clock.

He had that feeling again. The feeling that something was very wrong.

Ragnar Jonasson has mastered the atmospheric thriller and this could not be more apparent than when reading NIGHTBLIND. The town of Siglufjordur plays just as much of a role in the mysteries filling the pages of this book, as the characters involved. The days are becoming darker and darker, as the weather threatens intense snowy conditions at any moment. Couple that with a town full of people who don’t want to talk to the out-of-towner cop and a tangled political situation looming overhead, Jonasson delivers a standout slow-burn thriller.

My favorite thing about reading a book from the Dark Iceland series has easily become Ari Thor. Of course any main character headlining a series is meant to draw the reader into reading the books simply for the sake of knowing what will happen with them. There is something so incredibly human about Ari Thor, that I think readers will develop genuine concerns for his present life, his past, and his future. Just like all of us, Ari Thor has his faults, but they lend him to be a better policeman instead of hindering his work. He is constantly trying to help those in need and doesn’t mind the gossipy town of Siglufjordur talking about him behind his back if it means that at the end of the day he saved a life.

There was some dark thread running through his character that was best avoided: he was quick to anger and capable of almost pathological jealousy.

Adding to these fantastic elements, NIGHTBLIND also includes diary passages from a person who has been sent to a psychiatric ward, seemingly against their wishes. The reader knows that these passages play a role in the case Ari Thor is working on, but the author behind them remains hidden until the final few chapters. I found myself hoping each chapter would have a passage at the end and perhaps staying up too late just to get to those where they were included. I love these kinds of elements in crime fictions books, as I always feel they add another layer to the already present mystery. They also serve to put the reader into the mind of one of the characters in a much more intimate way than we get from standard narration.

NIGHTBLIND is an excellent follow-up novel to SNOWBLIND and truly served to solidify the connection I built with Ari Thor in the first novel, ultimately making my decision to carry on with reading one of these book a month, an easy choice.

One thought on “Book Review: Nightblind”