Since the last few days of 2018 are upon us, I thought it would be fun to feature a 2018 Wrap Up Series. Over 5 blog posts I will be highlighting books that I’ve read in 2018 across various topics: Best Instagram Book Club, Stephen King Reads, Best Debut Reads, Best Covers, and Favorites 2018 Reads. 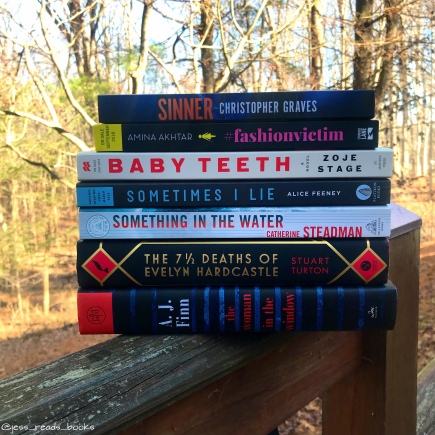 My reading line-up for 2018 was filled with standout debut reads that really captured  my heart. Check out the synopsis for each of these books below, as well as a link to my review!

*The order below does not reflect a ranking* 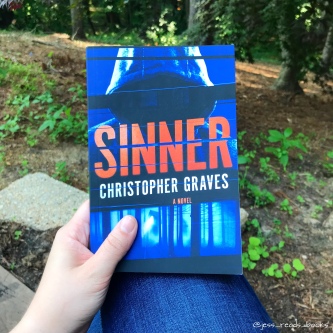 As a direct descendant of the 19th century vigilante gang, the Bald Knobbers, Ezekiel Woods, Jr. has been indoctrinated into a world ruled by violence and a literal interpretation of the bible his entire life. Now, over a hundred years later, Zeke continues his ancestors’ crusade, spending his days camouflaged as an aloof middle-aged grocery store sacker and his nights in a farmhouse cellar, preparing captives’ souls for their ultimate destiny: redemption or death. His latest abductee, an indomitable Texan working her way through a third-life crisis, chooses another option: escape. Zeke must recapture this lost sheep or face a consequence far worse than any worldly fate: that God has forsaken him.

Fashion editor Anya St. Clair is on the verge of greatness. Her wardrobe is to die for. Her social media is killer. And her career path is littered with the bodies of anyone who got in her way. She’s worked hard to get where she is, but she doesn’t have everything.

Not like Sarah Taft. Anya’s obsession sits one desk away. Beautiful, stylish, and rich, she was born to be a fashion world icon. From her beach-wave blonde hair to her on-trend nail art, she’s a walking editorial spread. And Anya wants to be her friend. Her best friend. Her only friend.

But when Sarah becomes her top competition for a promotion, Anya’s plan to win her friendship goes into overdrive. In order to beat Sarah…she’ll have to become her. Friendly competition may turn fatal, but as they say in fashion: One day you’re in, and the next day you’re dead.

Sweetness can be deceptive.

She’s the sweet-but-silent angel in the adoring eyes of her Daddy. He’s the only person who understands her, and all Hanna wants is to live happily ever after with him. But Mommy stands in her way, and she’ll try any trick she can think of to get rid of her. Ideally for good.

She loves her daughter, really, but after years of expulsions and strained home schooling, her precarious health and sanity are weakening day by day. As Hanna’s tricks become increasingly sophisticated, and Suzette’s husband remains blind to the failing family dynamics, Suzette starts to fear that there’s something seriously wrong, and that maybe home isn’t the best place for their baby girl after all.

SOMETIMES I LIE by Alice Feeney

My name is Amber Reynolds. There are three things you should know about me:
1. I’m in a coma.
2. My husband doesn’t love me anymore.
3. Sometimes I lie.

Amber wakes up in a hospital. She can’t move. She can’t speak. She can’t open her eyes. She can hear everyone around her, but they have no idea. Amber doesn’t remember what happened, but she has a suspicion her husband had something to do with it. Alternating between her paralyzed present, the week before her accident, and a series of childhood diaries from twenty years ago, this brilliant psychological thriller asks: Is something really a lie if you believe it’s the truth?

SOMETHING IN THE WATER by Catherine Steadman

A shocking discovery on a honeymoon in paradise changes the lives of a picture-perfect couple in this taut psychological thriller debut–for readers of Ruth Ware, Paula Hawkins, and Shari Lapena.

If you could make one simple choice that would change your life forever, would you?

Erin is a documentary filmmaker on the brink of a professional breakthrough, Mark a handsome investment banker with big plans. Passionately in love, they embark on a dream honeymoon to the tropical island of Bora Bora, where they enjoy the sun, the sand, and each other. Then, while scuba diving in the crystal blue sea, they find something in the water. . . .

Could the life of your dreams be the stuff of nightmares?

Suddenly the newlyweds must make a dangerous choice: to speak out or to protect their secret. After all, if no one else knows, who would be hurt? Their decision will trigger a devastating chain of events. . . .

Have you ever wondered how long it takes to dig a grave?

Wonder no longer. Catherine Steadman’s enthralling voice shines throughout this spellbinding debut novel. With piercing insight and fascinating twists, Something in the Water challenges the reader to confront the hopes we desperately cling to, the ideals we’re tempted to abandon, and the perfect lies we tell ourselves.

THE 7 1/2 DEATHS OF EVELYN HARDCASTLE by Stuart Turton

How do you stop a murder that’s already happened?

At a gala party thrown by her parents, Evelyn Hardcastle will be killed–again. She’s been murdered hundreds of times, and each day, Aiden Bishop is too late to save her. Doomed to repeat the same day over and over, Aiden’s only escape is to solve Evelyn Hardcastle’s murder and conquer the shadows of an enemy he struggles to even comprehend–but nothing and no one are quite what they seem.

Deeply atmospheric and ingeniously plotted, The Seven Deaths of Evelyn Hardcastle is a highly original debut that will appeal to fans of Kate Atkinson and Agatha Christie.

THE WOMAN IN THE WINDOW by A.J. Finn

Anna Fox lives alone—a recluse in her New York City home, unable to venture outside. She spends her day drinking wine (maybe too much), watching old movies, recalling happier times . . . and spying on her neighbors.

Then the Russells move into the house across the way: a father, a mother, their teenage son. The perfect family. But when Anna, gazing out her window one night, sees something she shouldn’t, her world begins to crumble—and its shocking secrets are laid bare.

What is real? What is imagined? Who is in danger? Who is in control? In this diabolically gripping thriller, no one—and nothing—is what it seems.

The below two books were also published in 2018 by debut authors, but I did not include them in the photo because I read them in 2017. However, they’re both fantastic books and deserve to be mentioned in this list!

THE CHALK MAN by C.J. Tudor

In 1986, Eddie and his friends are just kids on the verge of adolescence. They spend their days biking around their sleepy English village and looking for any taste of excitement they can get. The chalk men are their secret code: little chalk stick figures they leave for one another as messages only they can understand. But then a mysterious chalk man leads them right to a dismembered body, and nothing is ever the same.

In 2016, Eddie is fully grown, and thinks he’s put his past behind him. But then he gets a letter in the mail, containing a single chalk stick figure. When it turns out that his friends got the same message, they think it could be a prank . . . until one of them turns up dead.

That’s when Eddie realizes that saving himself means finally figuring out what really happened all those years ago.

THE WIFE BETWEEN US by Greer Hendricks & Sarah Pekkanen

Twisted and deliciously chilling, Greer Hendricks and Sarah Pekkanen’s The Wife Between Us exposes the secret complexities of an enviable marriage – and the dangerous truths we ignore in the name of love.

Read between the lies.