A mother of three has been found murdered in her home while her children slept in their beds. The only witness to this horrific crime is her daughter, Margret, who heard the disturbance and was hiding under her mother’s bed. Unable and unwilling to speak of that terrifying night, Margret holds the key to solving her mother’s murder. Detective Huldar is assigned the case and quickly finds himself in over his head. Being newly promoted to lead investigator and a severe lack of clues leave Huldar trying anything to get Margret’s help.

Enter Freya, a psychologist working for the Children’s House, a place that specializes in working with children who have been victims of crimes. Freya is determined to work in the best interests of Margret, but with mounting fears that the little girl’s life could be in danger, she must race against the clock to convince her to talk. Can Huldar and Freya catch this killer before he strikes again?

Strange how a single incident could blight your life, force it on to a course from which it would never deviate.

THE LEGACY kicks off Yrsa Sigurdardottir’s Children’s House series with a bang! This is the first book by Sigurdardottir that I have read and I’m so glad I picked up this gem of a book up! Sigurdardottir is hailed in Iceland as the Queen of Crime and despite having only this book to gauge her talents, I can easily see how she earned the title.

THE LEGACY is a unique mix of police procedural and thriller that truly keeps the reader second guessing everything. Within the story you are exposed to several plot lines related to the case, where you’ll get to spend time with Huldar, Freya, a young man named Karl whose connection you must work out, and the killer. With each chapter clues appear that draw the reader further into the case and the more you become invested, the harder it is to put the book down. 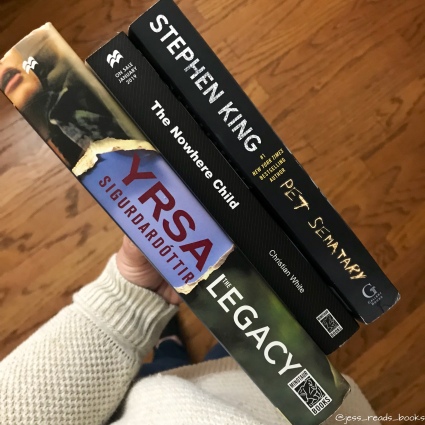 I’m not a sadist, you know. I’ve no desire to watch people suffer. It was a question of justice.

I truly savored reading this book. There are so many books in the thriller or crime fiction genre that I speed through because I don’t want to put them down. While I found myself not wanting to put this book down, I also found myself not wanting it to end. I grew deeply attached to those involved in the case, especially Freya and Huldar. I think that these two characters have such unique and defined personalities that I couldn’t help but enjoy reading about them and watching them work together.

What makes this book a true 5 star read for me? Aside from all of the great things I’ve already mentioned, the ending really pushed this book over the top for me. I had a hunch who the killer was. Wrong. I was blown away by how everything wrapped up and all of the pieces of the puzzle were connected. Purely entertaining goodness! I can’t wait to pick up book two in the series, THE RECKONING, as well as continue to explore Yrsa’s other series and standalone books. I think it’s safe to say, I’ve found a new favorite author!

7 thoughts on “Book Review: The Legacy”