I’ve seen tons of Valentine’s Day related posts all over Instagram and blogs featuring adorable couples and romantic gestures. In case you haven’t been by the blog before, those aren’t exactly attributes I look for when selecting a book. I would much rather read about a twisted, crazy relationship gone wrong! Feel the same way? Look no further than my Valentine’s Day bookstack featuring some of my favorite crime fiction reads. 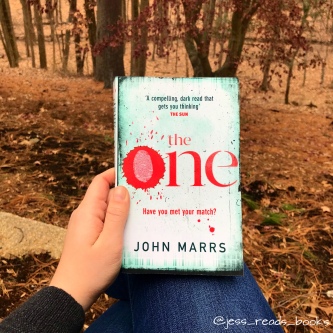 THE ONE by John Marrs

How far would you go to find The One?

A simple DNA test is all it takes. Just a quick mouth swab and soon you’ll be matched with your perfect partner—the one you’re genetically made for.

That’s the promise made by Match Your DNA. A decade ago, the company announced that they had found the gene that pairs each of us with our soul mate. Since then, millions of people around the world have been matched. But the discovery has its downsides: test results have led to the breakup of countless relationships and upended the traditional ideas of dating, romance and love.

Now five very different people have received the notification that they’ve been “Matched.” They’re each about to meet their one true love. But “happily ever after” isn’t guaranteed for everyone. Because even soul mates have secrets. And some are more shocking than others…

A word-of-mouth hit in the United Kingdom, The One is a fascinating novel that shows how even the simplest discoveries can have complicated consequences.

Sophie Duguet–young, successful, and happily married–thought at first she was becoming absentminded when she started misplacing her mail and forgetting where she’d parked her car the night before. But then, as her husband and colleagues pointed out with increasing frustration, she began forgetting things she’d said and done, too. And when she was detained by the police for shoplifting, a crime she didn’t remember committing, the confusion and blackouts that had begun to plague her took on a more sinister cast. Her marriage started to come apart at the seams.
Now Sophie is in much deeper water: the young boy she nannies is dead while in her care, a tragedy of which she has no memory. Afraid for her sanity and of what the police will do to her when the body is discovered, Sophie goes on the run, changing her identity and appearance to evade the law. Forced to lead a very different kind of life, one on the margins of society, Sophie wonders where everything went wrong.
Still, with a new name and a new life, she hopes that she’ll be able to put her demons to rest for good. It soon becomes clear, however, that the real nightmare has only just begun . . .

OUR KIND OF CRUELTY by Araminta Hall

Mike Hayes fought his way out of a brutal childhood and into a quiet, if lonely life, before he met Verity Metcalf. V taught him about love, and in return, Mike has dedicated his life to making her happy. He’s found the perfect home, the perfect job, he’s sculpted himself into the physical ideal V has always wanted. He knows they’ll be blissfully happy together.

It’s all just part of the secret game they used to play. If Mike watches V closely, he’ll see the signs. If he keeps track of her every move he’ll know just when to come to her rescue…

A spellbinding, darkly twisted novel about desire and obsession, and the complicated lines between truth and perception, Our Kind of Cruelty introduces Araminta Hall, a chilling new voice in psychological suspense. 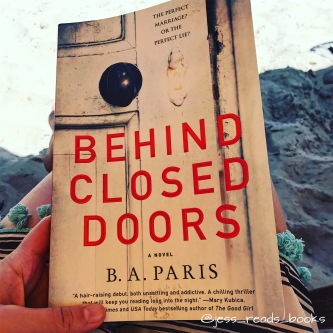 BEHIND CLOSED DOORS by B.A. Paris

Everyone knows a couple like Jack and Grace: he has looks and wealth, she has charm and elegance. You’d like to get to know Grace better. But it’s difficult, because you realize Jack and Grace are never apart. Some might call this true love.

Picture this: a dinner party at their perfect home, the conversation and wine flowing. They appear to be in their element while entertaining. And Grace’s friends are eager to reciprocate with lunch the following week. Grace wants to go, but knows she never will. Her friends call—so why doesn’t Grace ever answer the phone? And how can she cook such elaborate meals but remain so slim?

And why are there bars on one of the bedroom windows? 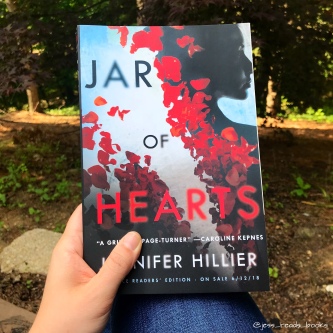 JAR OF HEARTS by Jennifer Hillier

This is the story of three best friends: one who was murdered, one who went to prison, and one who’s been searching for the truth all these years . . .

When she was sixteen years old, Angela Wong—one of the most popular girls in school—disappeared without a trace. Nobody ever suspected that her best friend, Georgina Shaw, now an executive and rising star at her Seattle pharmaceutical company, was involved in any way. Certainly not Kaiser Brody, who was close with both girls back in high school.

But fourteen years later, Angela Wong’s remains are discovered in the woods near Geo’s childhood home. And Kaiser—now a detective with Seattle PD—finally learns the truth: Angela was a victim of Calvin James. The same Calvin James who murdered at least three other women.

To the authorities, Calvin is a serial killer. But to Geo, he’s something else entirely. Back in high school, Calvin was Geo’s first love. Turbulent and often volatile, their relationship bordered on obsession from the moment they met right up until the night Angela was killed.

While everyone thinks they finally know the truth, there are dark secrets buried deep. And what happened that fateful night is more complex and more chilling than anyone really knows. Now the obsessive past catches up with the deadly present when new bodies begin to turn up, killed in the exact same manner as Angela Wong.

YOU by Caroline Kepnes

When a beautiful, aspiring writer strides into the East Village bookstore where Joe Goldberg works, he does what anyone would do: he Googles the name on her credit card.

There is only one Guinevere Beck in New York City. She has a public Facebook account and Tweets incessantly, telling Joe everything he needs to know: she is simply Beck to her friends, she went to Brown University, she lives on Bank Street, and she’ll be at a bar in Brooklyn tonight—the perfect place for a “chance” meeting.

As Joe invisibly and obsessively takes control of Beck’s life, he orchestrates a series of events to ensure Beck finds herself in his waiting arms. Moving from stalker to boyfriend, Joe transforms himself into Beck’s perfect man, all while quietly removing the obstacles that stand in their way—even if it means murder.

A terrifying exploration of how vulnerable we all are to stalking and manipulation, debut author Caroline Kepnes delivers a razor-sharp novel for our hyper-connected digital age. You is a compulsively readable page-turner that’s being compared to Gone Girl, American Psycho, and Stephen King’s Misery.

ALL THE BEAUTIFUL LIES by Peter Swanson

Harry Ackerson has always considered his stepmother Alice to be sexy and beautiful, in an “otherworldly” way. She has always been kind and attentive, if a little aloof in the last few years.

Days before his college graduation, Alice calls with shocking news. His father is dead and the police think it’s suicide. Devastated, Harry returns to his father’s home in Maine. There, he and Alice will help each other pick up of the pieces of their lives and uncover what happened to his father.

Shortly after he arrives, Harry meets a mysterious young woman named Grace McGowan. Though she claims to be new to the area, Harry begins to suspect that Grace may not be a complete stranger to his family. But she isn’t the only attractive woman taking an interest in Harry. The sensual Alice is also growing closer, coming on to him in an enticing, clearly sexual way.

Mesmerized by these two women, Harry finds himself falling deeper under their spell. Yet the closer he gets to them, the more isolated he feels, disoriented by a growing fear that both women are hiding dangerous—even deadly—secrets . . . and that neither one is telling the truth. 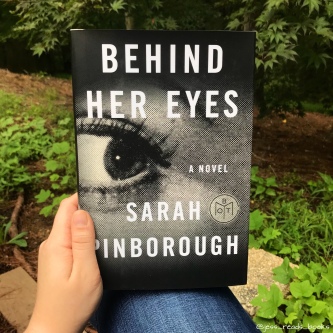 BEHIND HER EYES by Sarah Pinborough

Louise is a single mom, a secretary, stuck in a modern-day rut. On a rare night out, she meets a man in a bar and sparks fly. Though he leaves after they kiss, she’s thrilled she finally connected with someone.

When Louise arrives at work on Monday, she meets her new boss, David. The man from the bar. The very married man from the bar…who says the kiss was a terrible mistake but who still can’t keep his eyes off Louise.

And then Louise bumps into Adele, who’s new to town and in need of a friend, but she also just happens to be married to David. David and Adele look like the picture-perfect husband and wife, but then why is David so controlling, and why is Adele so scared of him?

As Louise is drawn into David and Adele’s orbit, she uncovers more puzzling questions than answers. The only thing that is crystal clear is that something in this marriage is very, very wrong, but Louise can’t guess how wrong―and how far a person might go to protect their marriage’s secrets.

Interested in snagging a copy of any of these books? Check them out here!:

The One: Amazon| Book Depository

Behind Her Eyes: Amazon| Book Depository

There was an error retrieving images from Instagram. An attempt will be remade in a few minutes.