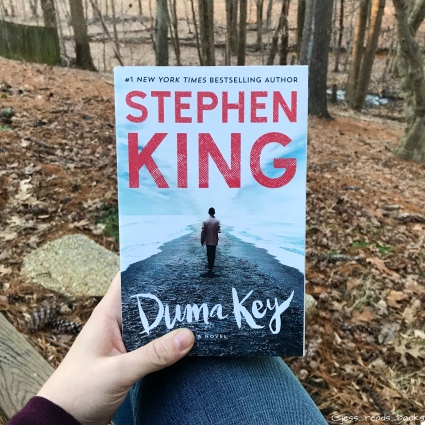 Edgar Freemantle’s world is flipped upside down thanks to a terrible construction accident that leaves him without a right arm, prone to memory issues, and struggling with his words and vocabulary. Rehabilitation is no easy experience and Edgar is often the victim of bouts of frustration bordering on rage when he cannot make his body work properly. In addition to physical pain, Edgar’s heart takes a beating as he watches his wife, the woman he loves and raised two daughters with, leave him. She can no longer deal with Edgar’s struggles and anger. He no longer is sure he wants to continuing living this life he has found himself in.

On the advice of his psychologist, Dr. Kamen, Edgar decides to try out a “geographic cure” and relocate from Minnesota to Duma Key, Florida. This small island lies in the Gulf of Mexico, where the stunning sunsets make the strangely underdeveloped island irresistibly beautiful. Edgar finds a new will to heal, physically with beach walks and mentally by starting to draw. There is something about his accident and this new home that have sparked an artistic talent Edgar didn’t know he had. Shifting away from the solitude Edgar thought he needed, he starts to form a bond with his neighbors, Wireman and Elizabeth Eastlake. This sickly woman and her caretaker hold the answers to many long held secrets about Duma Key and the ghosts of Elizabeth’s childhood that still call the island home. There is something beautiful and strange happening on this island and if Edgar isn’t careful things are bound to take a dangerous turn.

I thought there would be time, but we always think stuff like that, don’t we? We fool ourselves so much we could do it for a living.

DUMA KEY is a novel about love, loss, finding yourself, and a dose of supernatural. At the core of this story is Edgar Freemantle, a man who went from leading an idyllic life to debating whether or not he wants to continue living. King beautifully details the heartbreaking experience Edgar is going through post-accident. You can feel the pain and anger associated with Edgar’s injuries and struggles. Despite the negative, there is a glimmer of hope for both the reader and Edgar beneath the pain.

The island of Duma Key is the catalyst to healing Edgar. Once he arrives, Edgar starts to sketch brilliant pictures that he didn’t realize he could create. These sketches soon transform into frantic episodes of painting. Initially these paintings are only abstract works, however, they soon begin to transform into something else and appear to hold the ability to connect to their subject matter. Edgar isn’t the only one experiencing something otherworldly. His neighbor and instant friend, Wireman, has a bit of the “shine”. Wireman has been through a traumatic experience of his own, was lead to Duma Key under random circumstances, and now seems to be able to read the thoughts of those around him. It’s more than intuition. His time on the island has given him a special gift. Duma Key has given both men abilities they never had before.

…when memory takes its strongest hold, our own bodies become ghosts, haunting us with the gestures of our younger selves.

The friendship between Edgar and Wireman sets the stage for both men to grow and change for the positive. They find a deep connection through their experiences and losses. Joining their duo is Elizabeth Eastlake, long-time inhabitant of Duma Key, who finds herself slipping into the ugly hold of dementia. Elizabeth is the voice of warning. She knows what the island has in store for her friends and is trying to gain enough clarity to warn them before it is too late.

It’s hard to decide on who my favorite character out of the trio is because King writes each of them with such a depth that you can feel a genuine connection to each of them. Elizabeth is the feisty older woman who takes no crap. Wireman is your faithful best friend who would do anything to help you. Edgar is an honest, loyal, and kind man trying to recreate himself after losing all the things that made him who he was. They will each always hold a special place in my literary heart for the joy and sorrow that their stories brought me while reading DUMA KEY.

When I look back on that time, it’s with the strangest stew of emotions: love, longing, terror, horror, regret, and the deep sweetness only those who’ve been near death can know.

In the midst of building such deeply rich characters, King also builds up the character of Duma Key for us. The island very much as a mind of its own thanks to a supernatural power residing on it. The island’s ability to influence those living on its land manifests in strange and unusual ways. There is also a very dark side to this force that is explored through Elizabeth’s past, as well as present day. I love the history that King built around this power and the island.

I read this book as part of a discussion group and several people had issues with the ending. Initially, I was in the same camp. I didn’t think the ending was exciting enough or as dramatic as I had hoped for. After several days of thinking about how to review this book and what to say, I realized that the ending fit the book. DUMA KEY isn’t flashy or a thrill ride. It’s a story that has depth and charm and characters a reader can sympathize with. I think the ending was tense and eerie in a way that fit the characters involved and certain scenes definitely had my heartbeat racing.

I guess it doesn’t matter; gone is gone. And over is over. Sometimes that’s a good thing.

DUMA KEY is a book that I won’t forget anytime soon and one that I hope makes it into that select category of books I choose to reread. I think there are plenty of subtle touches and clues I may have missed along the way.