Welcome to another installment of Top Ten Tuesday (hosted by That Artsy Reader Girl)! 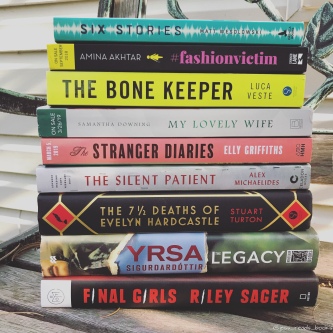 This week’s installment is a book to screen freebie, so I’m focusing on books I’ve recently read that I would love to see made into movies. I actually did a similar post on my Instagram recently (photo above), so below I’m showing off those nine titles I used for that and then my top pick from the books I’ve read in the last few months!

1997. Scarclaw Fell. The body of teenager Tom Jeffries is found at an Outward Bound center. Verdict? Misadventure. But not everyone is convinced. And the truth of what happened in the beautiful but eerie fell is locked in the memories of the tight-knit group of friends who embarked on that fateful trip, and the flimsy testimony of those living nearby. 2017. Enter elusive investigative journalist Scott King, whose podcast examinations of complicated cases have rivaled the success of Serial, with his concealed identity making him a cult internet figure. In a series of six interviews, King attempts to work out how the dynamics of a group of idle teenagers conspired with the sinister legends surrounding the fell to result in Jeffries’ mysterious death. As every interview unveils a new revelation, you’ll be forced to work out for yourself how Tom Jeffries died, and who is telling the truth. {Review} 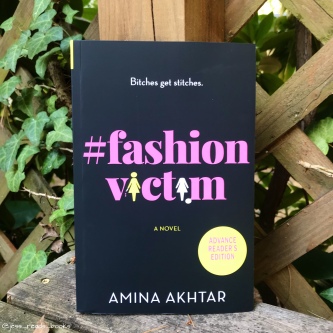 Fashion editor Anya St. Clair is on the verge of greatness. Her wardrobe is to die for. Her social media is killer. And her career path is littered with the bodies of anyone who got in her way. She’s worked hard to get where she is, but she doesn’t have everything.

Not like Sarah Taft. Anya’s obsession sits one desk away. Beautiful, stylish, and rich, she was born to be a fashion world icon. From her beach-wave blonde hair to her on-trend nail art, she’s a walking editorial spread. And Anya wants to be her friend. Her best friend. Her only friend.

But when Sarah becomes her top competition for a promotion, Anya’s plan to win her friendship goes into overdrive. In order to beat Sarah…she’ll have to become her. Friendly competition may turn fatal, but as they say in fashion: One day you’re in, and the next day you’re dead. {Review}

3. THE BONE KEEPER by Luca Veste

What if the figure that haunted your nightmares as child, the myth of the man in the woods, was real?

Twenty years ago, four teenagers went exploring in the local woods, trying to find to the supposed home of The Bone Keeper. Only three returned.

Now, a woman is found wandering the streets of Liverpool, horrifically injured, claiming to have fled the Bone Keeper. Investigating officer DC Louise Henderson must convince skeptical colleagues that this urban myth might be flesh and blood. But when a body is unearthed in the woodland the woman has fled from, the case takes on a much darker tone. The disappeared have been found. And their killer is watching every move the police make. {Review}

4. MY LOVELY WIFE by Samantha Downing

Dexter meets Mr. and Mrs. Smith in this wildly compulsive debut thriller about a couple whose fifteen-year marriage has finally gotten too interesting…

Our love story is simple. I met a gorgeous woman. We fell in love. We had kids. We moved to the suburbs. We told each other our biggest dreams, and our darkest secrets. And then we got bored.

We look like a normal couple. We’re your neighbors, the parents of your kid’s friend, the acquaintances you keep meaning to get dinner with.

We all have secrets to keeping a marriage alive.

Ours just happens to be getting away with murder. {Review} 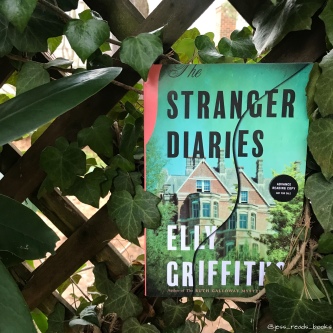 5. THE STRANGER DIARIES by Elly Griffiths

Clare Cassidy is no stranger to murder. A high school English teacher specializing in the Gothic writer R. M. Holland, she teaches a course on it every year. But when one of Clare’s colleagues and closest friends is found dead, with a line from R. M. Holland’s most famous story, “The Stranger,” left by her body, Clare is horrified to see her life collide with the storylines of her favourite literature.

To make matters worse, the police suspect the killer is someone Clare knows. Unsure whom to trust, she turns to her closest confidant, her diary, the only outlet she has for her darkest suspicions and fears about the case. Then one day she notices something odd. Writing that isn’t hers, left on the page of an old diary: “Hallo, Clare. You don’t know me.”

Clare becomes more certain than ever: “The Stranger” has come to terrifying life. But can the ending be rewritten in time? {Review}

6. THE SILENT PATIENT by Alex Michaelides

ALICIA
Alicia Berenson writes a diary as a release, an outlet – and to prove to her beloved husband that everything is fine. She can’t bear the thought of worrying Gabriel, or causing him pain.

Until, late one evening, Alicia shoots Gabriel five times and then never speaks another word.

THEO
Forensic psychotherapist Theo Faber is convinced he can successfully treat Alicia, where all others have failed. Obsessed with investigating her crime, his discoveries suggest Alicia’s silence goes far deeper than he first thought.

And if she speaks, would he want to hear the truth? {Review}

7. THE 7 1/2 DEATHS OF EVELYN HARDCASTLE by Stuart Turton

It is meant to be a celebration but it ends in tragedy. As fireworks explode overhead, Evelyn Hardcastle, the young and beautiful daughter of the house, is killed.

But Evelyn will not die just once. Until Aiden – one of the guests summoned to Blackheath for the party – can solve her murder, the day will repeat itself, over and over again. Every time ending with the fateful pistol shot.

The only way to break this cycle is to identify the killer. But each time the day begins again, Aiden wakes in the body of a different guest. And someone is determined to prevent him ever escaping Blackheath… {Review}

8. THE LEGACY by Yrsa Sigurdardottir

The Legacy is the first installment in a fantastic new series featuring the psychologist Freyja and the police officer Huldar.

The only person who might have the answers to a baffling murder case is the victim’s seven-year-old daughter, found hiding in the room where her mother died. And she’s not talking.

Newly-promoted, out of his depth, detective Huldar turns to Freyja for her expertise with traumatized young people. Freyja, who distrusts the police in general and Huldar in particular, isn’t best pleased. But she’s determined to keep little Margret safe.

It may prove tricky. The killer is leaving them strange clues, but can they crack the code? And if they do, will they be next? {Review} 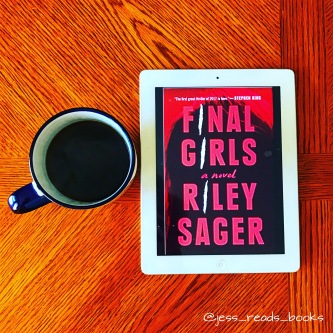 Ten years ago, college student Quincy Carpenter went on vacation with five friends and came back alone, the only survivor of a horror movie–scale massacre. In an instant, she became a member of a club no one wants to belong to—a group of similar survivors known in the press as the Final Girls. Lisa, who lost nine sorority sisters to a college dropout’s knife; Sam, who went up against the Sack Man during her shift at the Nightlight Inn; and now Quincy, who ran bleeding through the woods to escape Pine Cottage and the man she refers to only as Him. The three girls are all attempting to put their nightmares behind them, and, with that, one another. Despite the media’s attempts, they never meet.

Now, Quincy is doing well—maybe even great, thanks to her Xanax prescription. She has a caring almost-fiancé, Jeff; a popular baking blog; a beautiful apartment; and a therapeutic presence in Coop, the police officer who saved her life all those years ago. Her memory won’t even allow her to recall the events of that night; the past is in the past.

That is, until Lisa, the first Final Girl, is found dead in her bathtub, wrists slit, and Sam, the second, appears on Quincy’s doorstep. Blowing through Quincy’s life like a whirlwind, Sam seems intent on making Quincy relive the past, with increasingly dire consequences, all of which makes Quincy question why Sam is really seeking her out. And when new details about Lisa’s death come to light, Quincy’s life becomes a race against time as she tries to unravel Sam’s truths from her lies, evade the police and hungry reporters, and, most crucially, remember what really happened at Pine Cottage, before what was started ten years ago is finished. {Review}

10. THE LAST by Hanna Jameson

Jon thought he had all the time in the world to respond to his wife’s text message: I miss you so much. I feel bad about how we left it. Love you. But as he’s waiting in the lobby of the L’Hotel Sixieme in Switzerland after an academic conference, still mulling over how to respond to his wife, he receives a string of horrifying push notifications. Washington, DC has been hit with a nuclear bomb, then New York, then London, and finally Berlin. That’s all he knows before news outlets and social media goes black—and before the clouds on the horizon turn orange.

Now, two months later, there are twenty survivors holed up at the hotel, a place already tainted by its strange history of suicides and murders. Those who can’t bear to stay commit suicide or wander off into the woods. Jon and the others try to maintain some semblance of civilization. But when the water pressure disappears, and Jon and a crew of survivors investigate the hotel’s water tanks, they are shocked to discover the body of a young girl.

As supplies dwindle and tensions rise, Jon becomes obsessed with investigating the death of the little girl as a way to cling to his own humanity. Yet the real question remains: can he afford to lose his mind in this hotel, or should he take his chances in the outside world? {Review}