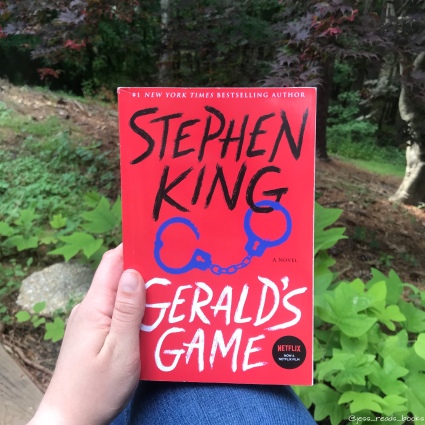 Jessie and Gerald Burlingame have set off to their secluded summer home for a romantic getaway. When Gerald tells Jessie he wants to play one of his new sex games, she immediately becomes weary. Not wanting to start a fight she submits to letting him handcuff her to the bed. Quickly things change from a good time to a situation of nightmares. Gerald has crossed a line with Jessie, giving her no choice but to fight back. The day will end with deadly consequences.

Jessie is trapped, handcuffed to the bed with no feasible means of escape. There is no one nearby to hear her scream for help. As night starts to fall her lakeside house transforms from blissful to prison. In order to survive, Jessie must be willing to push herself beyond her wildest imagination. She is in for the fight of her life. 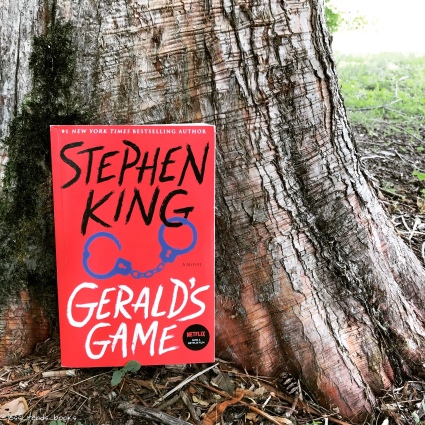 GERALD’S GAME is the first book in my Stephen King journey that I’ve been pretty middle of the road about while reading it. To sum up my thoughts: It wasn’t bad, but it wasn’t great. I’m very impressed that King was able to write the majority of this almost 500 page book surrounding a situation that only lasted a few hours. That being said, I also feel like there were several parts that could be removed from the story and have it remain just as effective of a book. The level of detail we get doesn’t necessarily make the story better.

I greatly enjoy when stories use flashbacks to previous situations or have alternating timelines. King uses an event from Jessie’s childhood to break up the story of her current situation. The flashbacks are of a traumatic event that Jessie is simultaneously in denial about the truth of and also feels that it helped shape who she is today. The story is also used as a vehicle to help Jessie devise ideas for possible methods of escape.

She wants to change the past, but the past is heavy – trying to do that, she discovers, is like trying to pick up the house by one corner so that you can look under it for things that have been lost, or forgotten, or hidden.

I don’t think there is anyone who would want to find themselves in a situation where they feel trapped and unable to escape. This is exactly where we find Jessie. King writes in a way that truly makes the reader feel and envision Jessie’s predicament. His writing makes you question what you would do in Jessie’s situation and how far you would be willing to go in order to escape. I really appreciate the intensity of the situation and the elements that King adds to heighten that experience.

My biggest issue with this story was the ending. It felt like I spent 400+ pages reading one story, but ended up in a different ending. It just didn’t work or fit the book to me. I think King’s goal was to wrap up the story neatly, but I actually thought the vagueness made the entire book have a more ominous feeling to it. I loved the premise of the ending, but for a different book or perhaps it’s own book. It just didn’t fit with the plot.

At the end of the day I would say that if you’re looking to read all of Stephen King’s works, that this one should of course make its way on to your reading list. If you’re just interested in trying out some of King’s work, there are better options available. Reader be warned, if you do choose to pick this book up there are gory scenes and discussions of child abuse.