Tom Kennedy’s wife passed away suddenly and he believes nothing will help is son, Jake, more in recovering from this tragedy than making a fresh start. They are on the hunt for a new beginning in the town of Featherbank. What they find behind the walls of their strange looking new home are a series of horrors that no family should have to face. When Jake starts to tell his father about the boy in the floor and a man is found lingering on their property, Tom can no longer brush these strange instances aside.

The town of Featherbank has a dark history. Twenty years ago a serial killer abducted and murdered five young boys. Known as The Whisper Man, Frank Carter went undiscovered for a time, luring his victims from their beds by whispering at their windows in the night. It seems someone is out to bring the memories of The Whisper Man back to present day. A young boy has recently vanished. Detectives Amanda Beck and Pete Willis must revisit the town’s history and open up old wounds in order to protect the citizens around them. As Jake starts to report whispers at his window, the reality that the Kennedy family might be the killer’s next target comes to light.

If you leave a door half open, soon you’ll hear the whispers spoken.
If you play outside alone, soon you won’t be going home.
If your window’s left unlatched, you’ll hear him tapping at the glass.
If you’re lonely, sad, and blue, the Whisper Man will come for you.

You know how there are books that get hyped, but don’t necessarily live up to the rumors? We’ve all been there, right? Well THE WHISPER MAN is not that book! This is a book that deserves every single ounce of praise it has received and more!

I’m a massive fan of authors including the use of folklore in their crime fiction stories. I think it adds an element that connects the reader to their childhood and hearing scary stories and wondering if they were real. Even if you’ve never been in that position, you’ve likely seen a movie or watched a TV show with that focus and can relate to how unsettling folklore can be. THE WHISPER MAN hones in on the tale of a serial killer using the same title. He was known for abducting and subsequently killing young boys after luring them into his grip by whispering at their windows. Haven’t you ever thought you heard something in the middle of the night and been creeped out? Scared to get out of bed and see what made the noise? No? Maybe I’m too jumpy, but the idea of someone whispering at my window creeps me out to no end! 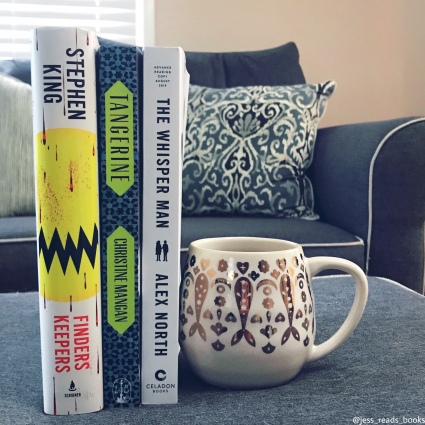 Some investigations stayed with you, sinking their claws in and hanging on, so that you would always have to drag them behind you no matter how hard you tried to dislodge them.

It seems that the town of Featherbank is not done with the lore of The Whisper Man. Either the man they imprisoned for these crimes did not do them or someone is acting as a copycat, which is where the crime fiction elements of this story pick up. Detectives Pete Willis and Amanda Beck are on two sides of this case. Pete has history with the original case and the imprisoned killer, Frank Carter. Amanda sees how the case haunts Pete and is weary, but committed to catching this potential copycat before they can reach the heights of the original crimes. I appreciate that North added several layers to these detectives, which allowed the reader to connect with their inner struggles and understand where they are coming from while investigating, instead of just using them to drive the direction of the plot.

Character building is something that North truly flourishes in demonstrating within the pages of THE WHISPER MAN. When I first started the story I wasn’t sure how the characters connected or where the story was headed, but what I was sure of was my interest in the characters. North has created well-rounded and engaging characters that use their quirks and their worries to ultimately draw the reader into them. You want to know why Tom doesn’t think he’s the greatest father, why Pete obsessively works out, and why Jack carries a packet of “special things”. The level of detail surrounding each character solidifies the reader’s interest and bond to each of them. This level of writing gives a book that you may assume at face value is solely a work of crime fiction, but in reality contains a much deeper message.

If there is one book that you choose to decide to be a part of the hype train for this year, I urge you to make it THE WHISPER MAN. I think what you’ll find is not only a creepy tale, but a story with heart and soul. This book is one that you’re going to want to talk to everyone about!

Disclosure: A huge thank you to Celadon Books for sending me a free copy of this book in exchange for my honest review!