Welcome to another installment of Top Ten Tuesday (hosted by That Artsy Reader Girl). Today I’ll be sharing book on my Fall TBR! This was actually the prompt for last week, but unfortunately I wasn’t able to post.

Fall is the perfect time to pull all of the spooky reads from your shelves and that’s just what I plan to do! I have a fun combination of backlist reads and new releases planned for the next few months. 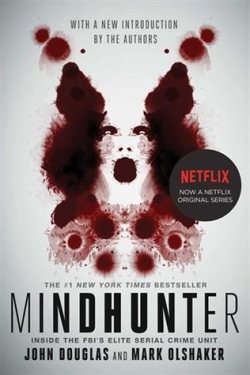 1. Mindhunter by John E. Douglas & Mark Olshaker: FBI Special Agent and expert in criminal profiling and behavioural science, John Douglas, is a man who has looked evil in the eye and made a vocation of understanding it. Now retired, Douglas can let us inside the FBI elite serial crime unit and into the disturbed minds of some of the most savage serial killers in the world.

The man who was the inspiration for Special Agent Jack Crawford in The Silence of the Lambs and who lent the film’s makers his expertise explains how he invented and established the practice of criminal profiling; what it was like to submerge himself mentally in the world of serial killers to the point of ‘becoming’ both perpetrator and victim; and individual case histories including those of Jeffrey Dahmer, Charles Manson, Ted Bundy and the Atlanta child murders.

With the fierce page-turning power of a bestselling novel, yet terrifyingly true, Mindhunter is a true crime classic. 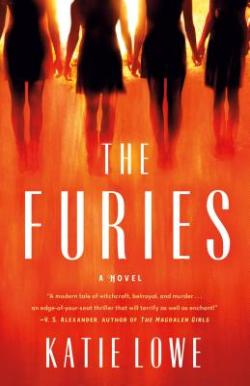 She’s posed on a swing on her boarding school’s property, dressed all in white, with no known cause of death. Whispers and rumors swirl, with no answers. But there are a few who know what happened; there is one girl who will never forget.

One year earlier: a new student, Violet, steps on the campus of Elm Hollow Academy, an all-girl’s boarding school on the outskirts of a sleepy coastal town. This is her fresh start, her chance to begin again in the wake of tragedy, leave her demons behind. Bright but a little strange, uncertain and desperate to fit in, she soon finds herself invited to an advanced study group, led by her alluring and mysterious art teacher, Annabel.

There, with three other girls–Alex, Grace, and Robin–the five of them delve into the school’s long-buried grim history: of Greek and Celtic legends; of the school founder’s “academic” interest in the occult; of gruesome 17th century witch trials. Annabel does her best to convince the girls that her classes aren’t related to ancient rites and rituals, and that they are just history and mythology. But the more she tries to warn the girls off the topic, the more they drawn to it, and the possibility that they can harness magic for themselves.

Violet quickly finds herself wrapped up in this heady new world of lawless power–except she is needled by the disappearance of a former member of the group, one with whom Violet shares an uncanny resemblance. As her friends’ actions take a turn for the darker and spiral out of control, she begins to wonder who she can trust, all the while becoming more deeply entangled. How far will these young girls go to protect one another…or to destroy one another?

3. Cage by Lilja Sigurdardottir: The prison doors slam shut behind Agla, when her sentence ends, but her lover Sonja is not there to meet her.

As a group of foreign businessmen tries to draw Agla into an ingenious fraud that stretches from Iceland around the world, Agla and her former nemesis, María find the stakes being raised at a terrifying speed.
Ruthless drug baron Ingimar will stop at nothing to protect his empire, but he has no idea about the powder keg he is sitting on in his own home.
At the same time, a deadly threat to Sonya and her family brings her from London back to Iceland, where she needs to settle scores with longstanding adversaries if she wants to stay alive.

With a shocking crescendo, the lives of these characters collide, as drugs, smuggling, big money and political intrigue rally with love, passion, murder and betrayal until the winner takes all … in the masterful, explosive conclusion to the award-winning Reykjavík Noir trilogy.

4. Little Siberia by Antti Tuomainen: A man with dark thoughts on his mind is racing along the remote snowy roads of Hurmevaara in Finland, when there is flash in the sky and something crashes into the car. That something turns about to be a highly valuable meteorite. With euro signs lighting up the eyes of the locals, the unexpected treasure is temporarily placed in a neighbourhood museum, under the watchful eye of a priest named Joel.

But Joel has a lot more on his mind than simply protecting the riches that have apparently rained down from heaven. His wife has just revealed that she is pregnant. Unfortunately Joel has strong reason to think the baby isn’t his. As Joel tries to fend off repeated and bungled attempts to steal the meteorite, he must also come to terms with his own situation, and discover who the father of the baby really is.

5. Dracula by Bram Stoker: Dracula is an 1897 Gothic horror novel by Irish author Bram Stoker. Famous for introducing the character of the vampire Count Dracula, the novel tells the story of Dracula’s attempt to move from Transylvania to England so he may find new blood and spread undead curse, and the battle between Dracula and a small group of men and women led by Professor Abraham Van Helsing. Dracula has been assigned to many literary genres including vampire literature, horror fiction, the gothic novel and invasion literature. The novel touches on themes such as the role of women in Victorian culture, sexual conventions, immigration, colonialism, and post-colonialism. Although Stoker did not invent the vampire, he defined its modern form, and the novel has spawned numerous theatrical, film and television interpretations. 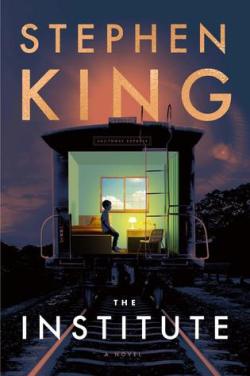 6. The Institute by Stephen King: In the middle of the night, in a house on a quiet street in suburban Minneapolis, intruders silently murder Luke Ellis’s parents and load him into a black SUV. The operation takes less than two minutes. Luke will wake up at The Institute, in a room that looks just like his own, except there’s no window. And outside his door are other doors, behind which are other kids with special talents—telekinesis and telepathy—who got to this place the same way Luke did: Kalisha, Nick, George, Iris, and ten-year-old Avery Dixon. They are all in Front Half. Others, Luke learns, graduated to Back Half, “like the roach motel,” Kalisha says. “You check in, but you don’t check out.”

In this most sinister of institutions, the director, Mrs. Sigsby, and her staff are ruthlessly dedicated to extracting from these children the force of their extranormal gifts. There are no scruples here. If you go along, you get tokens for the vending machines. If you don’t, punishment is brutal. As each new victim disappears to Back Half, Luke becomes more and more desperate to get out and get help. But no one has ever escaped from the Institute.

As psychically terrifying as Firestarter, and with the spectacular kid power of It, The Institute is Stephen King’s gut-wrenchingly dramatic story of good vs. evil in a world where the good guys don’t always win.

7. Helter Skelter by Vincent Bugliosi: Prosecuting attorney in the Manson trial, Vincent Bugliosi held a unique insider’s position in one of the most baffling and horrifying cases of the twentieth century: the cold-blooded Tate-LaBianca murders carried out by Charles Manson and four of his followers. What motivated Manson in his seemingly mindless selection of victims, and what was his hold over the young women who obeyed his orders?

8. The Luminous Dead by Caitlin Starling: When Gyre Price lied her way into this expedition, she thought she’d be mapping mineral deposits, and that her biggest problems would be cave collapses and gear malfunctions. She also thought that the fat paycheck—enough to get her off-planet and on the trail of her mother—meant she’d get a skilled surface team, monitoring her suit and environment, keeping her safe. Keeping her sane.

Instead, she got Em.

Em sees nothing wrong with controlling Gyre’s body with drugs or withholding critical information to “ensure the smooth operation” of her expedition. Em knows all about Gyre’s falsified credentials, and has no qualms using them as a leash—and a lash. And Em has secrets, too . . .

As Gyre descends, little inconsistencies—missing supplies, unexpected changes in the route, and, worst of all, shifts in Em’s motivations—drive her out of her depths. Lost and disoriented, Gyre finds her sense of control giving way to paranoia and anger. On her own in this mysterious, deadly place, surrounded by darkness and the unknown, Gyre must overcome more than just the dangerous terrain and the Tunneler which calls underground its home if she wants to make it out alive—she must confront the ghosts in her own head.

But how come she can’t shake the feeling she’s being followed?

9. The Saturday Night Ghost Club by Craig Davidson: When neurosurgeon Jake Breaker operates, he knows he’s handling more than a patient’s delicate brain tissue–he’s altering their seat of consciousness, their golden vault of memory. And memory, Jake knows well, can be a tricky thing.

When growing up in 1980s Niagara Falls, a.k.a. Cataract City–a seedy but magical, slightly haunted place–one of Jake’s closest confidantes was his uncle Calvin, a sweet but eccentric misfit enamored of occult artefacts and outlandish conspiracy theories. The summer Jake turned twelve, Calvin invited him to join the “Saturday Night Ghost Club”–a seemingly light-hearted project to investigate some of Cataract City’s more macabre urban myths. Over the course of that life-altering summer, Jake not only fell in love and began to imagine his future, he slowly, painfully came to realize that his uncle’s preoccupation with chilling legends sprang from something buried so deep in his past that Calvin himself was unaware of it. 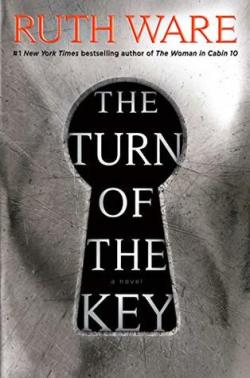 10. The Turn of the Key by Ruth Ware: When she stumbles across the ad, she’s looking for something else completely. But it seems like too good an opportunity to miss—a live-in nannying post, with a staggeringly generous salary. And when Rowan Caine arrives at Heatherbrae House, she is smitten—by the luxurious “smart” home fitted out with all modern conveniences, by the beautiful Scottish Highlands, and by this picture-perfect family.

What she doesn’t know is that she’s stepping into a nightmare—one that will end with a child dead and herself in prison awaiting trial for murder.

Writing to her lawyer from prison, she struggles to explain the unravelling events that led to her incarceration. It wasn’t just the constant surveillance from the cameras installed around the house, or the malfunctioning technology that woke the household with booming music, or turned the lights off at the worst possible time. It wasn’t just the girls, who turned out to be a far cry from the immaculately behaved model children she met at her interview. It wasn’t even the way she was left alone for weeks at a time, with no adults around apart from the enigmatic handyman, Jack Grant.

She knows she’s made mistakes. She admits that she lied to obtain the post, and that her behavior toward the children wasn’t always ideal. She’s not innocent, by any means. But, she maintains, she’s not guilty—at least not of murder. Which means someone else is.