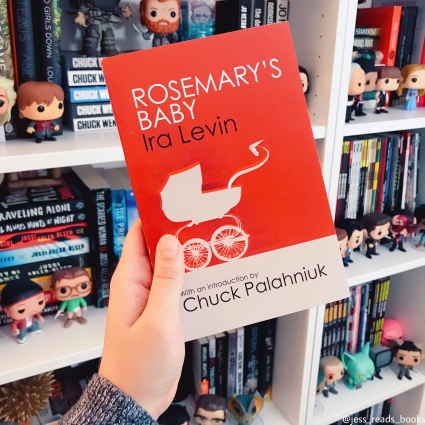 Rosemary Woodhouse and her struggling actor husband, Guy, have recently moved into the Bramford. This old New York City apartment building holds a haunted past, an ominous reputation, and is home to a large elderly population. The Woodhouse’s are embraced by their neighbors, Roman and Minnie Castavet, shortly after the Castavet’s house guest comes to an untimely death. At first the couple is unsure of their new found friendship with the Castavets, but Guy quickly falls under their charms.

Shortly after their move to the Bramford things begin to look up for the Woodhouses. Guy, thanks to a stroke of luck, lands a Broadway role that is destined to start his career. Rosemary has become pregnant and is working to build the family of her dreams. Shortly after the start of the pregnancy, Rosemary falls ill and her life becomes more and more isolated. Guy is away and the Castavets have taken a bizarre interest in her baby. Rosemary starts to suspect something is amiss around her, but what proof does she have? Is it all in her mind?

ROSEMARY’S BABY is an iconic movie from my childhood and I knew that this October I wanted to finally pick up Ira Levin’s book and see where everything started. My only complaint is that I waited so long to read this one!

The initial premise to ROSEMARY’S BABY reads a bit like a piece of literary fiction. The reader is spending time with the Woodhouse’s as they start to build their future. The couple is moving to a new apartment, Guy is actively working on growing his acting career, and Rosemary is pining for a family. Everything seems normal, except for the underlying level of unease Levin starts to create through a series of strange events happening around the couple. Things are looking up for them, but how is so much good happening to them when so much bad is happening to those around them?

At the root of this unease is the strange neighbors on the other side of the wall, the Castavets. This couple is older, the young woman they had taken under their wing has just died, and yet they feel the need to be extremely involved in Rosemary’s pregnancy. What is their motive? Why do they care so much? I loved the grand reveal at the end of this story where the reader is finally able to gather all of the creeptastic details!

If you’re looking for a piece of classic horror to add to your TBR, I highly recommend adding ROSEMARY’S BABY! I’ve heard some mixed reviews on the follow up, ROSEMARY’S SON, but I’m not opposed to picking it up sometime in the future. If you’ve read both, I would love to hear your thoughts!