Pip Fitz-Amobi is known for being a perfectionist at school. Everyone is surprised when for her senior capstone project she decides to look into a local murder case. There is something about the death of Andie Bell that does not add up for Pip. She isn’t convinced that Sal Singh was the one who took Andie’s life, but she can’t ask Sal what really happened because he too is dead.

A GOOD GIRL’S GUIDE TO MURDER is a YA mystery that breaks the stereotypes we often give books classified as YA. There was not a single moment that I felt like this story was juvenile or childish. Holly Jackson has turned a teenage-narrated story into a book that any lover of crime fiction can enjoy.

Our main character, Pip, is way more badass than I ever could have dreamed for myself as a senior in high school. There is no way I would have chosen to investigate a murder investigation in any format, but on my television. What the reader finds with Pip is a strong-willed character who truly makes decisions with her heart. She is willing to put her reputation on the line, as well as encounter more than a little danger while investigating Andie Bell’s case. Pip is someone I would want as my best friend! She’s loyal and fearless and determined to achieve her goals. 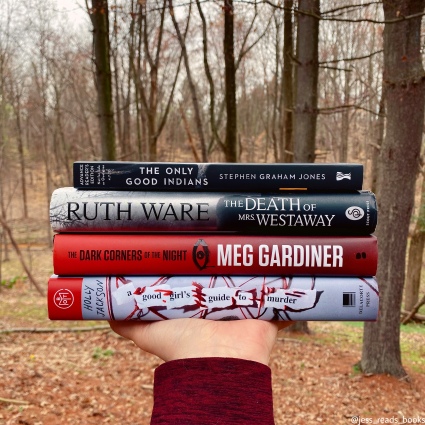 Along with Pip, Holly Jackson provides a great cast of secondary characters to fully round out this story. There are Pip’s best friends, her parents, and all of the seedy characters no one realized were residing in Fairview. I loved that this book evolved into so much more than Andie’s secrets through these secondary characters. It seems like everyone Pip talks to has something they would rather keep to themselves and in some form their secrets relate to Andie’s death. I loved following along with Pip to learn all of these character’s truths and find clues to what happened to Andie.

Holly Jackson hasn’t just provided fantastic characters in A GOOD GIRL’S GUIDE TO MURDER, she has also given the reader a fantastically layered and detailed murder mystery. I felt a little like I was watching a documentary as I was reading about Pip’s investigation. Jackson allows everything to unravel organically and in a way that subtly hints at the truth. Get ready to suspect literally everyone that Pip interviews and never trust anyone!

I cannot recommend this book more for any reader’s TBR! If you’re not sure about crime fiction, this book will sell you. If you’re a diehard crime fiction reader looking for something a bit less gorey, this is perfect. This story is fun, devious, and genuinely entertaining!

2 thoughts on “Book Review: A Good Girl’s Guide to Murder”