Barton Dawes feels like he’s losing everything he’s worked his whole life for. Highway 784 is being extended straight through Bart’s town and will ruin everything he holds dear. The laundry plant where Bart started his career needs to be relocated. The home where he has built a lifetime of memories is going to be demolished. As a result of the highway’s extension, Bart’s starting to lose his mind and is suddenly no longer the mild-mannered man his friends and family thought they knew. As the demolition gets closer to his house, Bart’s grasp on reality slips further and further away. 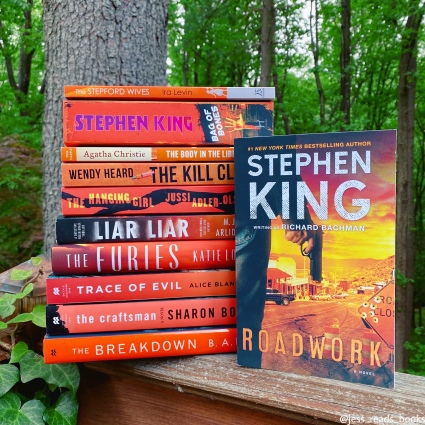 ROADWORK takes the reader on a trip into the mind of Bart, who is clearly losing his sense of reality. For years Bart has been living the American dream: moving up the corporate ladder, owning a home, marrying a loving woman. Over the years he has experienced hardships, but nothing could prepare him for his reaction to the local highway being extended straight through everything he loves. King delicately peels back the layers into Bart’s psyche as the date for his home’s demolition gets closer and closer.

There were times when I liked Bart and times when I really couldn’t start his character. Bart makes a lot of puzzling decisions in the wake of learning that his home is going to be destroyed. It’s clear from the start that he has his mind set on some sort of grand act to stand up for what he loves, but the way he treats those around him on his journey truly got under my skin. King lost me in the middle of the story with Bart deciding on a series of strange interactions regarding a hitchhiking woman he meets. While Bart annoyed me, no one upset me more than his wife. I wanted such a better reaction from her to Bart’s deteriorating health than she provided.

I really enjoyed that King decided to craft this story into a methodical journey towards Bart’s grand plan. I thought there were times the story could have been shorter, but I did appreciate learning all of the strange things Bart did in the months leading up to his house’s demolition. I think even through there were repetitive moments, they combined to show a true breakdown of Bart’s mind.

In my journey through King’s stories written as Richard Bachman, I would put this one down as my least favorite, but still enjoyable.