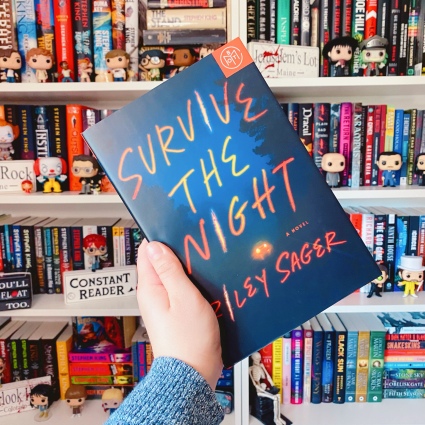 It’s November 1991. George H.W. Bush is in the White House, Nirvana’s in the tape deck, and movie-obsessed college student Charlie Jordan is in a car with a man who might be a serial killer. Josh Baxter, the man behind the wheel, is a virtual stranger to Charlie. They met at the campus ride board, each looking to share the long drive back to Ohio. After the brutal murder of her roommate by the man known as the Campus Killer, Charlie is desperate to escape her guilt and grief by going home. As she gets to know Josh on their drive, red flags pop up regarding everything from his reason for heading to Ohio to his connection to campus. Charlie’s worries take her straight to the conclusion that Josh is the Campus Killer, but is Josh truly dangerous or has she made connections that don’t exist?

I’m a huge fan of Riley Sager and every year I look forward to seeing what book he puts out next. They’re typically binge-worthy and while some are clearly heavily inspired by previous works, I find myself addicted to reading them. SURVIVE THE NIGHT was a bit of a struggle for me to get into and I think that stems from the fact that I had to suspend my belief to a huge degree. I understand things were different in the 1990’s and people were more trusting, but I just couldn’t get onboard with how Charlie was acting. What kept me going was just the curiosity to see how extreme things would progress. This is 100% a book where you want to scream “No, don’t do that!” over and over. While it might not have been my favorite Sager, I was still committed to seeing it through. I’ve seen a lot of mixed reviews, so I think this one that’s left to personal preference and my only recommendation is to go in as blind as possible.