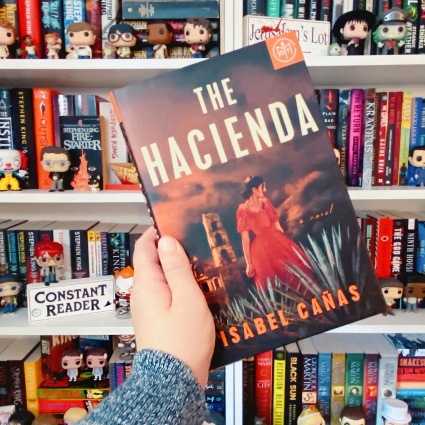 In the overthrow of the Mexican government, Beatriz’s father is executed and her home destroyed. When handsome Don Rodolfo Solórzano proposes, Beatriz ignores the rumors surrounding his first wife’s sudden demise, choosing instead to seize the security his estate in the countryside provides. But Hacienda San Isidro is not the sanctuary she imagined. When Rodolfo returns to work in the capital, visions and voices invade Beatriz’s sleep. The weight of invisible eyes follows her every move. Beatriz only knows two things for certain: Something is wrong with the hacienda. And no one there will help her. Far from a refuge, San Isidro may be Beatriz’s doom.

THE HACIENDA, Isabel Cañas’ debut novel, is the story of one woman trapped in the house of her nightmares. The sanctuary and freedom that Beatriz thinks she has found in Hacienda San Isidro is all a facade for a dark and violent past that has filled the home.

Cañas wisely chooses to unpack this story through dual narration from Beatriz and a priest that befriends her, Andres. There are also some chapters that go back in time to help reveal more of the history of the home. These chapters and the slow, methodical way that Cañas reveals the truth give the book a tense and eerie feeling. I love the overwhelming sense of dread I felt while reading the first half of this book. I had no idea what was coming and was just as stressed out as Beatriz wondering what would happen in the house next. While I was blown away with the first half of the story, certain twists featured in the second half changed the direction of where I thought things were headed and it left me less satisfied.

Overall, THE HACIENDA is a brilliant debut that left me eagerly awaiting whatever Cañas publishes next!