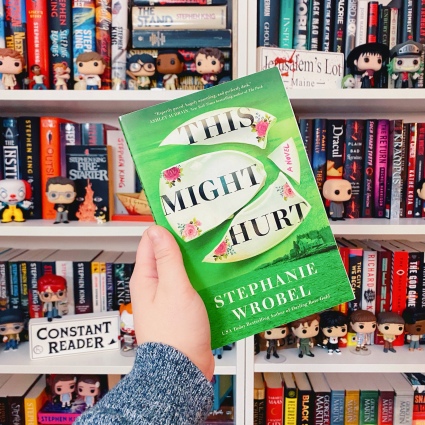 Natalie Collins hasn’t heard from her sister in more than half a year. The last time they spoke, Kit was slogging from mundane workdays to obligatory happy hours to crying in the shower about their dead mother. She told Natalie she was sure there was something more out there. And then she found Wisewood. On a private island off the coast of Maine, Wisewood’s guests commit to six-month stays. During this time, they’re prohibited from contact with the rest of the world–no Internet, no phones, no exceptions. But the rules are for a good reason: to keep guests focused on achieving true fearlessness so they can become their Maximized Selves. Six months later Natalie receives a menacing email from a Wisewood account threatening to reveal the secret she’s been keeping from Kit.

This Might Hurt is my second book from Stephanie Wrobel and each one has highlighted her unique ability to take real-world stories and create fictional versions based on them. Her first book took on Gypsy Rose and now this time around, we’re getting a cult that mirrors NXIVM.

Wrobel unpacks the story through a series of alternating narratives: an unknown narrator and our two sisters. I loved getting to know both Natalie and Kit through their own eyes and how the loss of their mother has impacted them. The unknown narrator was perhaps my favorite of the three. Don’t worry, you find out who they are with time!

The main reason I wanted to pick this one up was because of the cult aspect to this story. I’m a sucker for a cult story and Wrobel created an excellent fictional one. Based on the actions of the cult and the way the teachings were laid out, I’m confident that Wrobel was inspired by the real-world cult of NXIVM. There are a lot of parallels between Wisewood and NXIVM, but Wrobel gives her own spin to the situation.

A huge thank you to Berkley Books for my gifted copy!