Malcolm Kershaw is a bookseller running a Boston-based store called Old Devils that specializes in tales of crime fiction. The last thing he expects is for the FBI to come knocking on his door. Years ago, Kershaw created a blog post dedicated to eight books featuring perfect murders, those he deemed unsolvable. When FBI agent Gwen Mulvey shows up at his door with a theory that a murderer is out there recreating the murders from these books, no one is more shocked than Mal.

It seems that the FBI isn’t the only one watching Mal. This mysterious killer clearly knows who Mal is and has some sort of interest in dedicating his murderous streak to him. Mal is worried that the killer may not just be targeting him, but may also be interested in exposing Mal’s personal history and the secrets he has never told anyone, including his recently deceased wife. In order to protect himself, Mal launches an investigation of his own into the killer’s identity that leaves him paranoid everyone around him may be the person he’s looking for. As more victims start to turn up, Mal can feel his time narrowing. Can Mal catch the killer before they catch him?

EIGHT PERFECT MURDERS is a love letter to the genre of crime fiction through and through. The basis of the story is a set of new murders made to emulate those on Mal Kershaw’s list. These books are classics of the genre. Some I had heard of and some completely new to me. One of my favorite things about this book was that it didn’t just feature these eight books, but so many other amazing titles in the genre. I was so intrigued by every title mentioned that I kept a list on my notes app of all the titles and authors while I was reading. This is truly a book meant for bookworms to love and devour.

If the general premise of this book isn’t enough to convince you that you need it on your TBR, then the fact that this book was filled with a lot more twists than I was expecting, should be. I was thinking that this story would give me something cut and dry, to the point, but thoroughly mesmerizing. Swanson went above and beyond when writing this story and truly delivered something special. The twists are subtle and I didn’t see most of them coming. Much like with the books Swanson talks about inside this story, I was beating myself up later for missing all the clues! 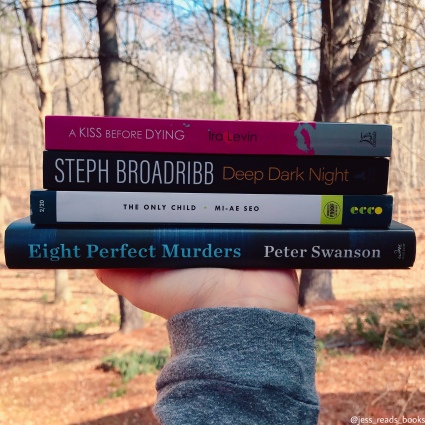 For me, part of what makes this story so special is our narrator and main character, Mal Kershaw. You can tell early on that Mal has some secrets from his past, but he’s so likeable that you’re easily ready to believe whatever he is hiding can’t be too bad. Mal gives off vibes of being this sweet old man who would own a bookstore that has a resident cat. I had to keep reminding myself that he was actually younger than I believed and had gone through quite the personal issues with his wife before ending up where he is now. That ease of likeability with Mal truly worked to draw me into this story and capture my attention from the moment it started.

It’s hard to contain my gushing about this book, which is easily my new favorite from Swanson! Not only is it a favorite for one of my favorite authors, but I see this book living a long life on my favorites shelf for years to come. This is a timeless tale that any reader would love!

A huge thank you to William Morrow and TLC Book Tours for my free copy!