Shannon Blaine has disappeared without a trace. The mother of two set off for a run along the rural roads surrounding her home in Lake George, New York and never returned home. Shannon has been taking the same running path for forever and has never mentioned any issues or strange people along her route. Her husband has no idea where she might have gone. The residents of this small town are shocked by her disappearance. From the outside looking in, Shannon Blaine was the perfect wife and mother. She had a peaceful and happy life that no one could ever imagine her abandoning. If Shannon didn’t leave, what happened to her?

True crime writer, Bailey Weggins, has just joined the staff of an up-and-coming online magazine, Crime Beat. Her first case is to investigate Shannon Blaine’s disappearance. Bailey quickly uncovers a plethora of secrets hiding under Shannon’s idyllic life: a strained relationship with her sister, a cheating brother-in-law, a deacon with a complicated past, and a creepy motel owner who watched Shannon on her runs every day. When Bailey receives a call from someone using a voice altering device she finds herself face to face with Shannon’s murdered body. From here things start to spiral and Bailey is caught in the web of a killer. Will she find justice for Shannon before finding herself in harm’s way? 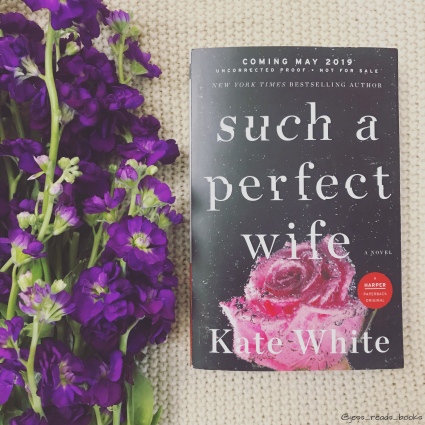 Don’t let the title or the fact that this story centers around a missing wife fool you into thinking that this book is going to be a domestic thriller. SUCH A PERFECT WIFE is much more than that!

The reader gets an outside look into the case as they follow Bailey Weggins, true crime writer and reporter, as she investigate the case. Bailey’s background in true crime gives her a solid knowledge base for what to look for when trying to find leads or potential suspects involved with Shannon Blaine’s disappearance and death. Bailey is a no-nonsense, strong female character who is will to ask the hard questions and dig into all potential leads. Her determined attitude ultimately leads her into Shannon’s taggled life, which opens the door to dark secrets surrounding those who know her best.

The premise that everyone knows everything about everyone in a small town holds true for Lake George, New York. Each resident of this town thinks they know Shannon best. They know the secrets and the truth, but no one really has a complete picture. Bailey is able to get a lot of her intel from this gossipy community, which helps to drive the storyline for SUCH A PERFECT WIFE. White’s use of the setting does not stop there however, she also uses the fact that this is a tourist town during the off-season to build a sense of isolation. Deserted buildings and odd out-of-towners start to come into play for Bailey’s investigation thanks to this setting, which helps to build the tension of the story.

While I wouldn’t categorize SUCH A PERFECT WIFE as an out-right thriller, I would say that it has several thrilling moments that propel the reader towards binge-reading. The creepy possibilities of what might be hiding in a desolate building or why that random out-of-towner keeps showing up in places where Bailey is. Not only do these events raise new questions in the mystery of Shannon Blaine’s death, but they also create a tense atmosphere that forces the reader to want to know more.

Now for the important question…if this is the 8th book in a series, can I read it as a standalone? 100% yes! Why am I so confident on this? Well, the answer is easy. I was approached to read this book by a fellow bookstagramer who I have read with in the past. When I looked it up I thought it sounded awesome and immediately said yes to the buddy read. Goodreads didn’t have it listed as part of a series and I had no idea that it was until after I finished reading. Did I miss anything from the previous books? Maybe, but it didn’t hinder my reading experience one bit! This book is perfect as a standalone, but now that I know it’s part of a series I am really curious about Bailey’s past and hope to go back and read through in order one day.

Disclosure: Thank you to Harper Books for sending me a free copy of this book in exchange for my honest review.

One thought on “Book Review: Such A Perfect Wife”