Against all odds Brady Hartsfield, the Mercedes Killer, has awakened from his coma. Believed to still lack the ability to function at a high level, he resides in Room 217 of the Lakes Region Traumatic Brain Injury Clinic where amidst his vacant stares and drool he plots his revenge. The chances of him making a complete recovery are close to non-existent according to his doctors. What they don’t realize is that Brady can communicate in a new way. He has developed deadly new powers that allow him into the minds of those near him.

Brady desperately wants revenge on the man who put a stop to his concert massacre plans. Retired police detective Bill Hodges tracked Brady down with the help of Holly Gibney and Jerome Robinson. When the trio is brought back together after a suicide case connected to the Mercedes killings occurs they realize they haven’t seen the last of Brady. This case will lead them to darker places than they have ever found themselves in before.

Potential for spoilers ahead…read at your own risk! 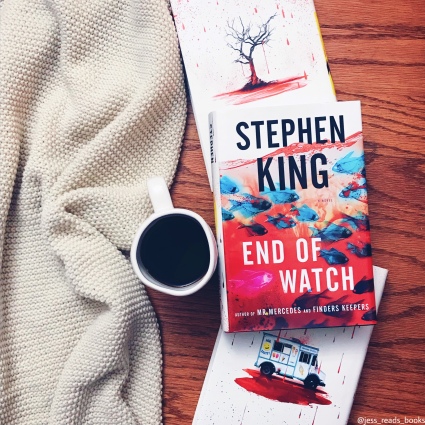 Because things can get better, and if you give them a chance, they usually do.

END OF WATCH is the third and final book of the Bill Hodges Trilogy and a fitting end to a wonderful experience! This book brings the reader back to the cast of characters that started everything for us with Bill, Holly, and Jerome battling against Brady Hartsfield. I love that this trilogy has chosen to focus on a recurring list of characters and building off of the main events of the first book. I have read many book series’ over the years and enjoy them most when they have some sort of connection that draws them together outside of simply using the main character. I think this gives the reader a sense of familiarity to the books and the contents, which ultimately creates a better reading experience.

One thing that sets END OF WATCH apart from the other two books in this trilogy is King’s decision to include psychological abilities. King’s love for this plot device has become quite common to me in his other books, such as CARRIE or FIRESTARTER. I think it’s something that fascinates him as a writer. For me I didn’t mind this addition to the storyline and thought that it added an interesting new element to the cat and mouse games that this series features. I read this book as well as the rest of the trilogy with a group and there were quite a few readers who didn’t enjoy this direction. I think it’s something that is up to the individual reader and therefore some will find this final book to be satisfying while others have the potential for disappointment. 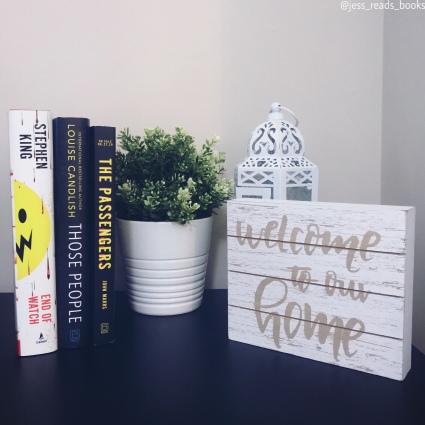 End of watch is what they call it, but Hodges himself has found it impossible to give up watching.

What worked for me the most in END OF WATCH were the emotions that King was able to draw out of me. Did I know the fate of some of the characters early on? Yes, of course. It was there in print. What I didn’t prepare for was how hard I would take those scenes. I didn’t account for how much King would be able to get straight to my heart. He did what not many authors can do and made me cry. They were a mix of happy tears, sad tears, and an overall appreciation for the characters in this trilogy.

I absolutely cannot recommend enough giving this trilogy a shot. If you have never read King before and wonder if he could be for you, I say try this trilogy because it’s not his norm. If you’re a fellow Constant Reader and can’t get enough of King, but aren’t sure about his take on crime fiction, I say give this one a chance! This trilogy has so many fantastic elements to it that you need to experience it for yourself!