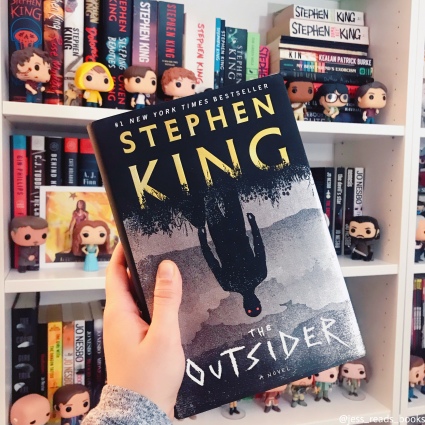 The brutally murdered body of an eleven-year-old boy has been found in a town park. All eyewitness testimonies and forensic evidence lead to one man, Terry Maitland, a well respected Flint City resident. Terry is a local English teacher, Little League coach, husband, and father of two young girls. How could he possibly have done something so awful?

Detective Ralph Anderson orders an immediate and very public arrest of Maitland, which turns the town into chaos. Despite all of the evidence against him, Maitland stands by the statement that he is innocent. When video proof showing Maitland in another town appears investigators are left scratching their heads. How could this man be in two places at once?

THE OUTSIDER is best described as a supernatural crime fiction story centered around a case that is impossible for the average person to believe. Could a man be in two places at once? The answer to this puzzle comes about through a fascinating story featuring a character, Holly Gibney, that King readers will remember from the Bill Hodges trilogy.

In a similar vein to the Bill Hodges trilogy, THE OUTSIDER features a case with an interesting premise that makes the reader question the reality of the events they are reading about. Throughout the first half of the book the reader is questioning who to believe and what actually happened. The only thing they know for sure is that a young boy was found murdered and his killer unknown. There is one obvious suspect, Terry Maitland, but the evidence seems to contradict his story. Who is the reader to believe? What really happened? I absolutely loved making up theories for what could have happened in Flint City and the truth to Terry Maitland’s story.

If you can’t let go of the past, the mistakes you’ve made will eat you alive.

King is well known for his ability to craft an intricate and extremely detailed story, which is exactly what the reader receives with THE OUTSIDER. This story has everything. There’s crime, local lore, engaging characters, deception. You name it, it’s possible this story has it! With the amount of details that King puts into building his stories readers expect endings on the same level. Over the years King has grown a reputation for not being able to deliver endings that are as grand or on the same level of depth as the story they belong with. For me personally, I loved the ending to THE OUTSIDER. What would have made it better is if it didn’t happen so quickly. I felt like I was on this long journey with characters I had grown to love and suddenly the case was concluded. I would have loved just a bit more meat to the ending.

I’ve heard some interesting feedback that people weren’t a fan of this story because of the supernatural aspect which honestly leaves me scratching my head a bit. Perhaps if this is your first King book I can let it slide, but for readers of multiple books, I feel this is something you come to expect from King. He loves to include supernatural elements to his stories. They aren’t always quite as large as they were for this book, but they’re always there in some way.

WARNING: I want to end my review by simply telling you that this one should earn a spot on your TBR! I cannot emphasize enough that you should wait to read this book until after completing the Bill Hodges trilogy as there are plot spoilers within this book. I think you’re robbing yourself from truly loving the trilogy if you don’t read them in order.

One thought on “Book Review: The Outsider”